The AGM: The Truth

October 31, 2012
Now then… now then… now then!!!!  It was a Wednesday evening and the run was set by the outgoing GM One Eyed Jack, who decided upon the start being at Lai Chi Shan opposite the Thai restaurant.  After quite a long walk from the MTR the turnout was looking good with about 15 or so runners including a few returnees. As Dingaling arrived drama ensued as Sam (aka. Battydog) decided to head-butt a passing taxi, dislodging the right side of the bumper in the process.  Not to worry as the old bill, in the form of Gunpowder Plod, took charge and after some hugs and kisses approximately 200 dollars were exchanged and we were ready for the off.  The GM gave some instructions about his version of markings including some check-backs and end of trails, and after the usual moaning and cursing we ran back down the road to the first check.  Hard up and Walkie Talkie got the first check correct as the trail went leftwards heading for the fancy housing complexes near Ma Wo.  Good to see Farty, Salesman, Desperate Dan and Chris Higgins running again…just like 1997!!!  Anyway we sort of did a ridiculous loop up and over a small hill, back down the main road and onto a check in front of the housing complex.  The poor security guard didn’t know what to do as shouts of “are you!” disturbed the local Halloween parties.  Anyway trail was found, cunningly running just behind the entrance gate and up onto some nice country trail.  A few more checks had us guessing but the usual smart arses in the form of Dingaling and Eunuch kept us together with their GPS like memories. A couple more checks took us deeper into the nature reserve until a check-back was found…oh bugger…back we went finding trail off into some grass and eventually back onto the Wilson trail.  There were a couple more checks but no-one bothered with these as we headed straight back down to Lai Chi Shan and on home to the Thai restaurant. 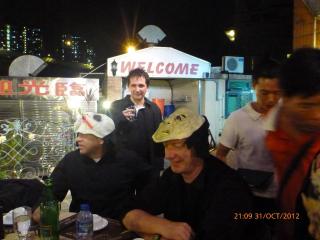 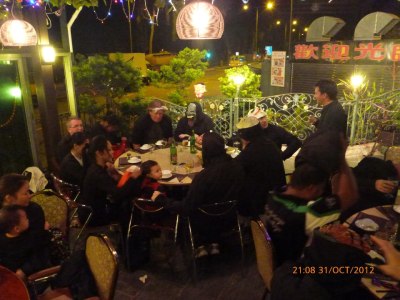 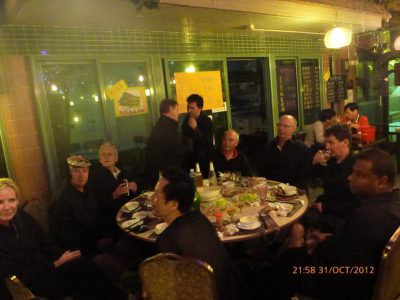 With our super sweaty bodies, two tables were taken and a selection of beers including Tsingtao, San Miguel, and yes Blue Girl were served.  Stingray decided to play out his favourite fetish and made us all wear black shirts, but late arrival Liberace needed no such prompting, turning up as a transvestite complete with make-up and stick on fingernails. 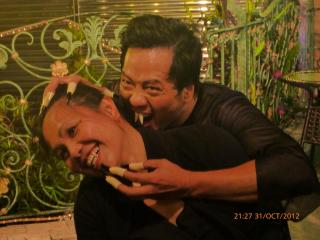 The food arrived during the festivities and after getting us suitably drunk the GM gave out Downs Downs for the past and present mismanagement positions culminating in the announcement of Gunpowder Plod being the new GM.  The rest of the Committee can be seen elsewhere on this blog, but needless to say this was yet another excellent evening with the N2TH3. 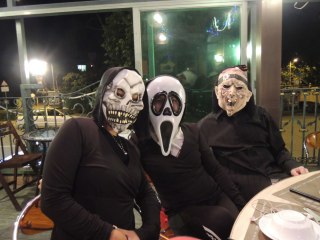