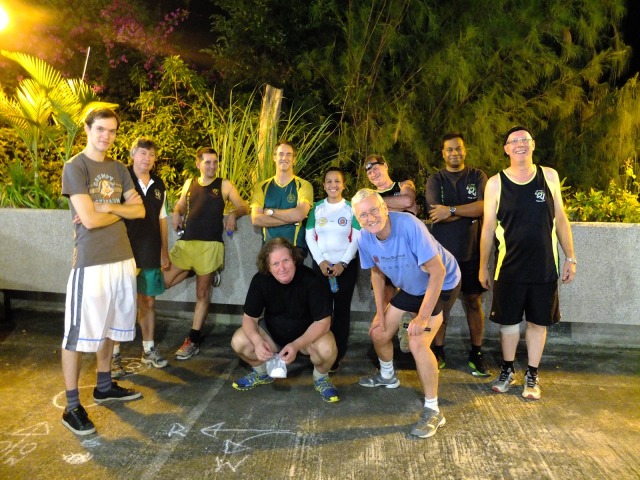 The hilarious sight of local boy and ace short-cutter One Eyed Jack getting the first check wrong after having short-cutted to it set the tone for the run. Trail went from the hare’s gaff along the spooky path where the hare gashed his face up three years ago and out to Castle Peak Road, then down to Tai Lam Chung Road, where Mango Groove was heard to declaim that we were running past the little park where Eunuch had dressed up as a witch in that fetching little black number for Halloween 2006, and did he still have it?

He was declaiming to a different tune minutes later, when at a five-way checked he’d gone up the hill and announced no trail to be seen, leading to at least 10 minutes of milling around until the hare put the pack out of its collective misery and showed the way across the bridge and into the shiggy. Mango’s plaintive bleat (“I’m friggin’ innocent! There was nothing here before!”) could be heard all across the valley as the pack climbed up through the trees and brambles, sans a confused-looking Gunpowder Plod, who arrived five minutes later muttering something about a troll hiding under the bridge. Aloft, a longish trot along a catchwater road led to the rambo / wimp split, with the wimps going down the road back to Mango’s ballsed-up check (and accounting for the presence of the hare, to mark the wimps trail off it). Meanwhile, the rambo trail went into a tunnel infested by giant fruit bats that whooshed past heads, wreaking psychohavoc. Plod, who hit the tunnel alone, complained of strange plopping sounds in the tunnel that put the shits up him, but it was the considered opinion of the pack that the plopping sounds were Plod dropping jobbies as he ran through. Eunuch twisted his ankle in the tunnel on a hateful bit of flat and limped back after front running most of the way to that point. The second half of the run went into shiggy above Tai Lam prison, along a ridge and down by way of a bamboo tunnel and more shiggy to the same village as before, and then back via another village to the finish on GB’s rooftop, where awaited a spread of bread, cheese, salami, grapes and fruit cake, washed down with all manner of wine. Mango emerged on the roof first, arms held aloft in triumph, but the nimble Stingray

slipped between his legs to claim victory, much to Mango’s chagrin, and put himself firmly in the lead of the N2TH3 “league table”, devised by himself. Meanwhile, as the pack rolled in, it became apparent that newcomer Eliot was nowhere to be seen. The pack showed its usual lack of concern for the lost by ripping into the goodies and booze, farting and laughing boisterously. Luk Sup Gow, Beer Tits and Young Phil had turned up, as well as Fartypants to up the flatulence quotient. The hare had just loaded up on roadies and was about to set out to look for Eliot when the lad emerged from the stairwell with tales of derring-do from the dark hills (he fell over). Plod and Mango conducted the circle as the Siu Lam sky was peppered with popping sparkling wine corks – yes, sparkling wine down-downs. 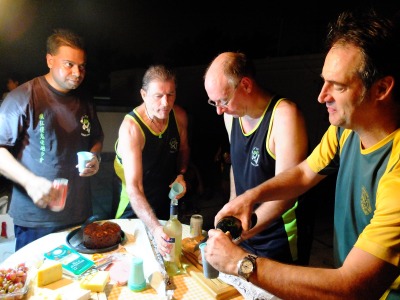 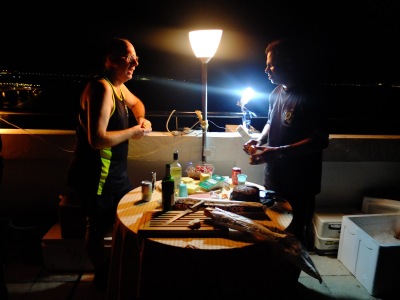