The first run of 2013 is at Chez Velcro from the swimming pool. 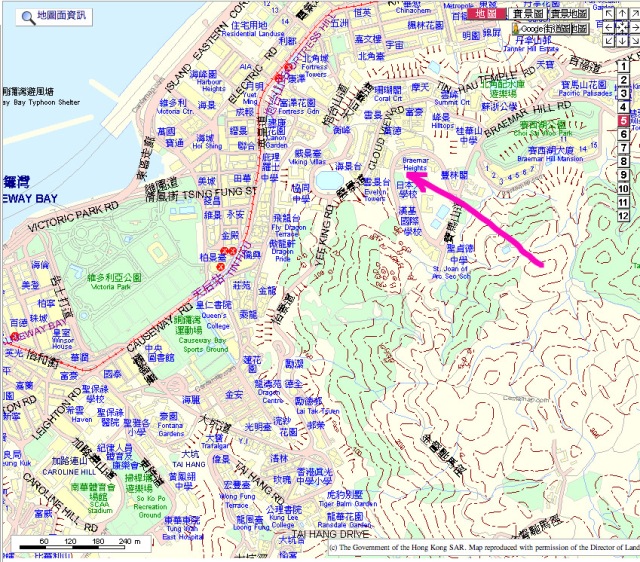 How did it happen? How did the Northern New Territories Hash in Fanling on Boxing Day, a rare daylight run, become swamped with Little Sai Waners? How is it that neither group knew the other was coming? Why were there two sets of confused runners milling around at the start eyeing each other up suspiciously? And why were the advertised hares, Golden Jelly and Catch of the Day, setting off with the pack? There was something very fishy going on…
Rumour had it that one group had “parasitized” the other, but with each group claiming precedence it was difficult to know. Another rumour had it that NT Hash Hare Raiser Golden Balls and Little Sai Wan stalwart and sometime NT runner Catch of the Day had hatched a diabolical plot during their secret trysts recceing January’s run for the Free China Hash. The labyrinthine web of uncertainty, the tissued maze of shifting perspectives, was only exacerbated by the presence of supposed hare Golden Jelly, claiming she couldn’t set the run after straining her neck in bed that morning, and Inflatadate, who had invited the NT Hash to his run earlier in the month, only to be told that we don’t like joint runs. Nobody was talking; it seems the truth will forever be a mystery. 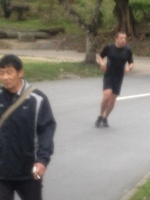 On to the run, set over roughly the same terrain as Catch of the Day’s run for the NT Hash earlier this year, except this time Russian hasher Ivana Nucock was the hare. The philosophical differences were laid bare in a brief exchange before the start, with GB lamenting how he felt like a pig had shat in his brain after getting drunk on Christmas Day, and Ivana Nucock responding with “Why do you want to get drunk?” The differences were also revealed in choice of kit, with LSW runners in cutting-edge running gear sipping electrolyte beverages while the NT crowd took to the field in scruffy old cotton teeshirts, beaten-up sneakers and a fortifying tinnie of tramp juice. And so this motley collection of hashers set off, up into the hills, through some good, blood-drawing shiggy, and all differences were forgotten in each individual’s personal struggle with the elements and his or her own private Valhalla…er, no, it was a hash. Canto Felcher, sporting go-faster Bradley Wiggins sideburns, thrashed it out at the front with Monkey Shot, with Canto prevailing, and Catch of the Day third. NT pride was restored with a clean sweep of the wimps’ medals: Golden Balls taking gold in a thrilling sprint finish with Bogbrush, and Golden Jelly third. Other finishers included One Eyed Jack, Stunt Double, Dram, Salesman and Stingray. A good trail with 6.5km for the rambos and 4.5km for the wimps.

Afterwards, with duelling mulled wine from Golden Balls and Canto Felch on offer, the one spiked with rum and the other with vodka (subsequently combined to the improvement of both), GM2 Salesman looked dazed running the circle, pulling off a passable Tommy Cooper impersonation. All sorts of posh food was put out for grazing on – at a price. Bobbledick, currently living in a tent to save on rent, had brought his own tupperware container of unappetizing boiled vegetables to save money, which he proceeded to wave under people’s noses while decrying their unhealthy eating habits. Eunuch turned up, still nursing broken ribs, and then Luk Sup Gow and Beer Tits, who wasted no time getting stuck in to the mulled wine. Each had sprog in tow. As dusk fell more posh food went on the barbie – salmon, scallops – and the hard-core of both hashes settled around the table to smoke the pipe of peace.

Editor’s note: Some of this report is untrue.

We’re allowing the New Territories Bike Hash to piggyback this site. Here’s some info about a bike hash in February.

Getting there: Make like you’re going to Hok Tau Reservoir – Sha Tau Kok Road then turn into Lau Shui Heung Road. After 150 metres there’s a sign for San Tong Po next to a rubber tree. Go down the slope. The run starts from the house on the left with a brown wooden fence.

As I weigh up the other hashers on the starting line, eyes narrowed in a steely glint, I realise that this is going to be my best chance of the year for a podium finish. The location (deepest Hung Shui Kiu), the hare (the notoriously reluctant Fartypants) and the weather (cold front fresh in that day) have all conspired to shrink the pack right down. The GM Plod is in Singapore, the RA Mango in the Philippines. Eunuch’s broken his ribs in a rather unfortunate incident at church when the parson mistook him for a choirboy. Bogbrush is toilet-trading. Salesman, newly elected GM of Sek Kong, won’t be seen again until his megalomania subsides. Moonie’s in his pod beneath the waves, Luk Sup Gow is on some company beano, Dram can’t afford the petrol and it’s too far to go for G-Spot. Various other excuses are proffered and rightly ridiculed. So there I stand, poised, eyeing up Stingray and One Eyed Jack. I’d have to be a right plonker to stuff this one up.
“Check it out!” yells Fartypants, who has, as usual, detailed Walky Talky to set the run for him, and the three of us set off eagerly into the mean streets of Hung Shui Kiu.

There’s some milling around outside the park, then One Eyed Jack calls from up some street or other and off we traipse. At the first check, the duo (as they shall henceforth be known) head towards the hills. I take the dark road to the left. Trail! I get the next check wrong and the duo pass me, ambling and nattering. “Mumble mumble of course mumble” – Estuary twang. “Rumble bumble rumble” – Border brogue. They take the easy paved option at the next check and I take the other option down the steep rubbly slope. Eureka! Ahead again. But the duo have broken into a trot as they peg me back. We’re running along a sound-barrier service road next to Yuen Long Highway, and arrive at the next check together. All three opt for the uphill option, but after 200 metres we encounter snarling dogs, so it’s back down. “Those stairs look good.” “Yes, stairs good,” grunt the duo. Meanwhile I duck back under the highway and spy a darkling trail. “I’m having that.” And so I pick up trail and bellow on on, but with two sets of sound barriers and a roaring highway between us I realise with glee that the duo can’t hear me. Time to make my move.
The rest of the run is a solitary tour of the boulevards and back alleys of Hung Shui Kiu and I get back after an hour of huffing and puffing to find the duo, Noddy-hatted, accusing me of short-cutting, while Walky Talky relates how they came back grumbling after they lost trail. Job done.
All that remains is for the non-running and morphined-up Eunuch to run a brief hilarious circle, doing his best not to laugh, before we all head for the daipaidong with Travis and Walky Talky’s doppelganger niece Alyzza in tow, to eat fine simple fare and toss back Tsingtao. A splendid evening. Run of the year, clearly. 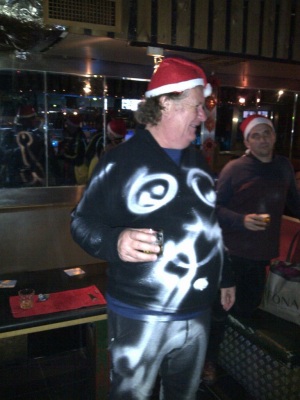 The mood was initially subdued, and we were light on regular superstar hashers (Dram, Dingaling, Velcro and Cheese-Port, BJ, Zimmerframe, Farty, Walky Talky, Bog Brush, Desperate Dan, Stuntdouble, Hoover etc…) basically the intelligent ones and those with proper jobs. Was it humbug? Or were they actually there? One Eyed Jack got the beers and kitty going though, the banter started and all was suddenly jovial. It wasn’t too hashy or silly, apart from Goldenballs whacking off to a copy of The Fellrunner. Victim, our resident Professor of English, stated that the word “fell” must be a typo as such a word does not exist. There were no hats, cans of spray snow and streamer gunk, tinsel or women C this had the makings of a good sporty attempt at the record of 23? (as if anyone could remember or confirm that). Some of our lovely women like Beer Tits and Sam Miguel the Carlsberg lady also materialised. Being an auspicious date, it was imperative that at least 12 pubs were visited. Eunuch, who had run off for 1 minute, returned with silly hats, snow and streamers. Terryman opted not to join us.
Plod set the first leg. That’s all about your scribe can recall ….. hang on …. Erm… let’s tell the rest in discrete flashback nuggets….:
First check was by the stairs beside the King’s Belly. Nobody (Victim) bothered to check even a few stairs and ambled off into the main street. Salesman eventually checked, however, and ran up the hill, through the park, around the back, and into Johnny Tripod Bar #1. Big Moany was already there. Then we went to some more pubs, and in each one endeared ourselves to the locals by spraying them, popping balloons, being gay hashers, sloshing drink around, and attempting to sing in Cantonese. Gunpowder Plod was shaping up to become an early liability. By Bar #3, most hashers were sprayed up, Beer Tits’ work on GoldenBalls being worthy of artistic mention (see pic).

Some very short legs lead to zig-zagging across a side street. Only Salesman strictly followed Mango’s trail to the Hippo Bar(?) by vaulting the metal fence, but with no You-Tube WTFFail.com face-plant. Farty and Walky Talky sudden materialised, I think, and then teleported off.  There was a sing song in the Old Booby London. It was all getting a bit fearsome, so Luk Sup Gow, perhaps, set a long trail to Tai Wo. Chemical Ali provided ample sustenance for the journey. The German Bar (#9) was the only one with decent beer in full pints. We were thirsty. Plod suddenly jerked his hand and spilt his beer, but swung around, eyes darting, convinced that someone else had just soaked him. From about bar #7 to #12, we started losing hashers one by one. Big Moany got the call from She Who Must Be Obeyed. Not sure how Eunuch faired, he seemed to be around for much of it. Cleaver Bar #12 or #13 must have been around midnight. Upon stepping out into the cool air, OEJ called it a day.

Chemical Ali, Come On Eileen [shorely shome mishtake – Ed.] were the last standing couple, and strolled off into the moonlight. Salesman, sole returnee to the King’s Belly at 1am (Bar#14), lost Victor and Kenny with psycho-babble before lurching off for McD’s, taxi, and a long, dehydrating kip on the sofa.
In short, a long run, hilly, shiggy, river crossings and mad dogs, about 2.6km in 5 hours. Merry Christmas Batty Boys and Gals!
Next week’s run: Fartypants

The record stands at 24 “establishments” visited in 2010 by a handful of hard-core runners including BOF, One Eyed Jack, Serbian Bomber and Golden Balls. Will the record fall this year? Will Tintin blow all the funds in one pub? Will we make it to the new German bar? Will we make it to the as-yet unvisited Chinky (set up by a returning Brit Hongkonger)? Come along to the King’s Belly for the 7.30pm aperitif. Or come earlier, if you think you’ve got the testosterone. Ladies welcome to dilute the testy quotient.