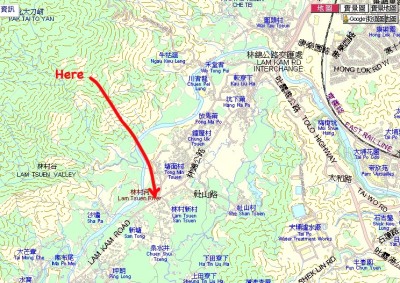 Ooh well it was a lovely daytime run for the Northern New Territories on the Chinese New Year public holiday and the weather was fantastic. On top of that it was Ash Wednesday so the cigars were out (naughty!) and to top it off we could get all girly and wet cos next day was Valentine’s Day. So we’re all waiting there at the Hobbit House park and there’s no hare and no trail.

Lots of confusion and then the GM, who didn’t seem very on the ball at all (he probably thought he was on a Shek Kong  outing because of the sunshine) said we should all move over to the bridge on the other side of the fishponds. Chaos as he tried to rally us for a proper start but half the pack had already started. So we’re going along all these village paths and tracks and Eunuch and Stunt Double keep short-cutting, and the kennel dogs are barking and the kites are flying and it was brilliant.

Then there was the rambo-wimp split and I took the wimps but we could see all the rambos climbing up to the ridge of Kai Kung Leng and disappearing over the top.

We took an easy walk back to the start but the rambos went down shiggy to Fairview Park and then came back through the villages, with Monkey Sh*te outsprinting Salesman and Eunuch at the finish. Hoover did the rambos, got lost, and Stunt Double got an earful and had to go and rescue her in the car. Thought these people knew how to hash in daylight! Then as we were waiting for the stragglers Bogbrush tossed his not-quite-empty Tsingtao can into what looked like a bag of rubbish, causing howls of anguish from Big Moany as the crumpled cardboard box poking out the top of the bag (his bag of oddments) was actually his cigar.
Dram then decided it was Proclaimers time and blasted the peaceful scene with his cassette tape of the Scotch warblers crooning Letter From America from his state-of-the-art car sound system. GB got in on the act with his own tiny piece of equipment (!) and gave us a dose of Sunshine On Leith. Not satisfied with that he got out some fireworks he’d nicked from Golden Jelly’s farm last night and started letting them off. They were like whizzbangs – Whoosh! Bang! And Hamish and Sam started whimpering in distress. Cruel GB! Loads of kids came over to see what was happening and a Hong Kong hasher on a bike who’d just moved to Kam Tin trundled past, but no rozzers. 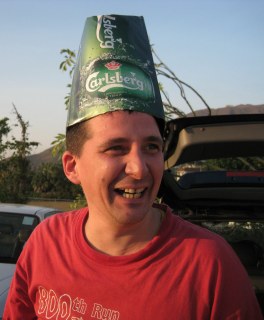 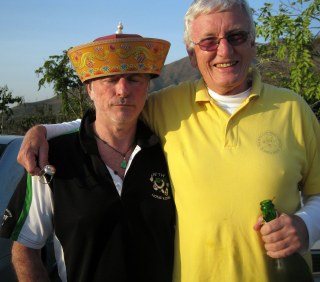 After Hoover got back it was circle time with G-Spot, Salesman and Screwless sporting interesting topiary but outdone by Plod wearing a CNY snacks tin on his head and Eunuch sporting a pope’s hat made from a Carlsberg box in his role as the new pope, Improper I.
The sun started to go down and it was all just gorgeous but we couldn’t have an on on because all the daipaidongs were closed so we went home. A fine afternoon.