The following day is a public holiday, so Chemical Ali has very graciously offered to host a swarm of smelly hashers at his vodka palace in Yuen Leng after the run. Come along and earn your poison. 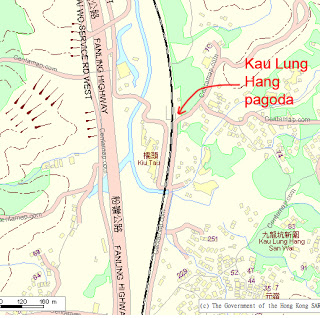 Run Report by GM appointed by Golden Balls to appoint someone else but who forgot in all the excitement of the evening to appoint said someone else.
1st Draft
We came, we ran a little, we drank and argued about God and went home.
2nd Draft (after prodding and abuse from the N2TH3 Blogger)
A select few turned up for this run in the wilds of north Kam Tin. Gunpowder Plod and WhySoSyria were the first to arrive at the beautiful pagoda to the east of the village reached by crossing either a modern bridge or the well preserved ancient Chinese stone and locally-famed Pin Mo Kiu (“Convenience of Mother Bridge”) adjacent to it. No sign of the Hares or Mother but a large chalk circle with Start inside it reassured us as we huddled together in the dark.
Next a veritable flood of eager hashers arrived in the shape of returnee Gone West (or Come East, I forget), One Eyed Jack, and Eunuch complete with beer, softies, crisps, Pop Pans and altar wine. Sadly, no Golden Balls or Jelly who had gone cycle tour recceing in the PRC, defraying their expenses with powdered baby milk for sale in Shenzen. Fartypants and Walky Talky plus dog Dylan turned up. Inexplicably Fartypants/Dylan was mistaken for Golden Balls by Hard Up. We all agreed that this was an underststandable mistake given that Farty admitted to having  a hard Sevens weekend’s partying, pie eating and beer tasting.
Then the Hares returned from a spot of canoodling in the empty nearby villa. “It will be a short run” says The Hare Formerly Known as Chris Higgins who apparently changed his name to conceal his identity and was promptly given it back again by a sympathetic RA. Everyone cheered at this news except Plod who muttered darkly something about driving all this way from Sai Kung hoping for a good work out.
So off we went and the trail was a fine example of how to lay a trail. Large, strong chalk circles and arrows and plenty of checks to keep us together.  Through the alleyways of the old village to begin with, then around the lake and off towards the hills. Then a bit of shiggy skirting a kennels and out onto a road. Alas the trail then headed back towards the village instead of into the hills and after a long check-back where the Hare had been forced to retrace his steps, we were back on the out trail and home; 27 minutes and 3km later.
After this exhausting exercise, we tucked into the goodies before the circle. Everyone had a down down for something which used up three tins of Skol and then WhySoSyria started interrogating Eunuch about God. This wide-ranging and rather one-sided discussion, with Eunuch bravely defending his position against the unbelieving heathen majority, took up most of the evening and used up most of the alcohol available.
The other hot topic was the recent arrest in Texas of some Hong Kong triad for growing pot, possession of firearms and soliciting sodomy. Wan Hung Lo, who was once duffed up big time by said triad and his mates (while the Sham Shui Po post-1997 cops took their sweet time responding to his 999 call) tracked him down and dropped a dime on him to the Texas Rangers who then SWATTED him and sent him to gaol.
It was pointed out to Chris, however, that he might actually have done his nemesis a big favour as he was probably now getting himself rogered frequently and for free by his new Brothers in the Texas State Penitentiary.
Next run: April 10, Walky Talky
The Hareline