Run 1583
A Fence Runs Through It
By Gunpowder Plod

WhySoSyria (knees up on my dashboard, eyes wide shut) and I arrived first at this select start location in the back of beyond Hung Shui Kiu. Or so we thought, as we parked in the entrance to that world famous financial institution “Bong Yan Finance Co” (presumably the local branch of the Wo Hop To triads).
A female form was discerned sitting on the kerbside. Walky Talky sitty scratchy. So, while WSS and WT wondered off to do a bit of surreptitious recceing, I sauntered over to a beat up old charabanc hidden in the bushes and produced my tremendous todger for a wizz. Before I could wizz, however, a grizzled face appeared at the window in the form of One Eyed Jack who then aimed his Box Brownie at me; pervert! I shot off, almost tripping over my member, before he could add me to his willy pic collection.
In short order, other members appeared in the form of G-Spot, clad for the office, and Golden Jelly. No sign of either Hare or Beer! Then GJ hands me a call from GB. “I’m – puff – still out here. Couldn’t – wheeze – find my trail from – snort – 4 years ago! Back in 10 – gasp”(crash noises off).
So we hung around and finally GB appears closely followed by Eunuch, Mango and Beer.
The Hare reminisces: 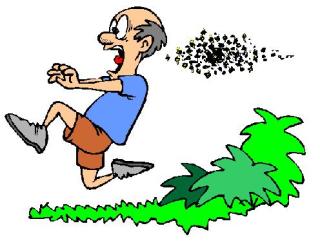 So, off we went up the hill to the first check, quickly solved, up a dark village path, bravely led by Fearless Me with WhySoSyria hanging back and plaintively calling “Isn’t this where we are supposed to stick together to fend off packs of rabid beasts??” We passed several pretty pooches yapping behind locked gates and that was it; very disappointing. I threw away my iron bar in disgust.

Then it was up the valley on a slippery shiggy trail now led by Eunuch, Mango, G-Spot, WSS and OEJ with Plod, WT and GJ bringing up the rear. Clever trail laying exposed the FRBs to cunning check-backs and route choice but in the end they were well ahead across the dam and then up up up a steep path and finally down down down and onto a gently inclining but very rough old track which reduced me to a careful shamble until caught at the bottom by GJ and WT holding hands and giggling.
Then we all regrouped as the FRBs almost shortcut at a check:
Finally, the FRBs took off again along the highway minus G-Spot, wisely following Plod who, suspecting as much, located a side trail through a gate and back under the highway through a tunnel to another check. Here Plod checked the wrong way and the whole catching pack (minus Eunuch) followed G-Spot on a long but interesting, fast running loop home.
Circle by Plod (5 DDs for Hare) and Mango involved everyone and concluded with another 4 DDs for Hare by OEJ (GB snitched on by GJ) for losing or destroying 4 mobile phones in as many months. Good cold down down beer, tasty orange crisps for the Hare and Pop Pans for the rest of us, the Best Hash in Hong Kong. OnOn