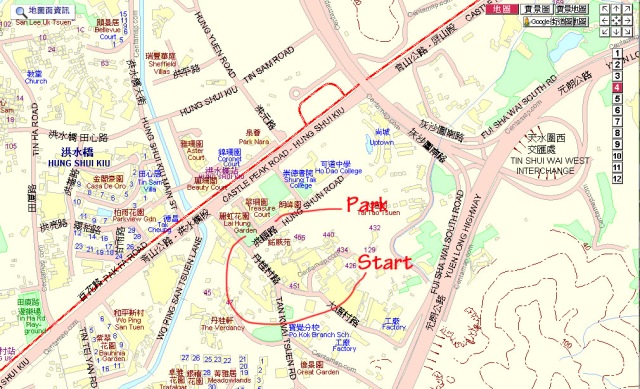 Comment: As Farty doesn’t get back from his travels until July 3, it’s a safe bet that he’s “delegated” this run to the missus. In other words, a splendid Walky Talky run!

We’ve run from here before, the little park behind the daipaidongs.

This is the report that should have been put out, not the liner notes by Plod. Good to see Big Moany living up to his name

Hare: Dram
The hash met at the Shek Kong daipaidong (Leafy Glade), the first time BM had been to an N2TH3 hash for months. Again he was reminded why, with the usual half-hour wait for some tosser having a cuppa at home.
With the arrival of around 12 people the GM insisted on everyone waiting until half past seven (this is the run start time! – GM) before the run commenced. Mango and Mr Ray had the right idea and started the run without the GM’s permission, the first thing Sting Ray has ever done right.
The hash cocked up within the first 50 yards as the hare had given the wrong direction. The Scot denied it but let’s face it they are a bunch of lying buggers anyway. The trail was found by the GM and the hash went off confused as usual. Onto the first 6-way check by the river to reunite the pack. Big Moany checked the usual path right but turned back as it was overgrown! Plod tried again later, found trail and then BM pushed past the GM (insulting expletive deleted – GM) only to be re-overtaken as he didn’t like the spiders. On this first and only bit of shiggy, BM had a WTF moment as this was the first night run he had done in a year.
Soon Dingaling led the way with Salesman, BM and Mango doing their best to catch up. Plod got lost at the second check finding multiple circles with crosses in them; official hash markings? Then Mango and Salesman swearing by all things holy promised to call trail. BM went off looking for trail only to discover that Mango the check-hanging bastard had gone off on the correct trail and did not call On On; is he Scottish?
None of the FRBs marked checks or called (leaving this to the GM, by now far behind). BM decided to call it a day and went back to Leafy Glade heartbroken.
All in all a good run for a trail that had been hit a thousand times.
Down downs – who cares, but the GM produced the SKH3 GM’s accoutrements (helmet and doggy basher) and returned them to Salesman in time for his lesser hash AGM on Sunday.
Report by Big Moany edited by Plod 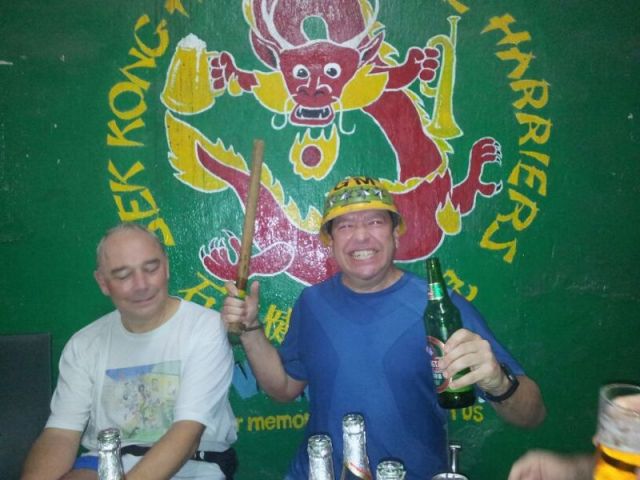 Hare: Dram
An excellent fast, flat run by Dram around all the old familiar places which somehow still managed to confuse Eunuch who got lost for the second time in 2 weeks.
Brilliant Circle by GM who again offered to resign but was was persuaded unanimously to stay on by the adoring pack.
GM however again forgot in the awolness of the blogger to appoint a Run Reporter sooooooo….
All Runners and the Hare are hereby required to submit a minimum of  50 words about the run starting with “I shall not….” and concluding with “All hail the GM!”
The entry judged to be most complimentary will be rewarded by a free copy of “The Little Red Swear Book” signed by the author.
Ed: Mystery guest in the guise of some former Jap GM of a lesser hash, whose ground we once again stomped. Accompanying him is the newly elected GM of said lesser hash.
Next run (July 10): Big Moany