Skip to content
Having incurred the Wrath of Velcro for last week’s speculative map, I’m going one better this week, and admitting the map is utterly speculative. I don’t know any better than Adam exactly where the run starts, apart from it’s “at the playground as per the usual place” – a place I’ve never run from! 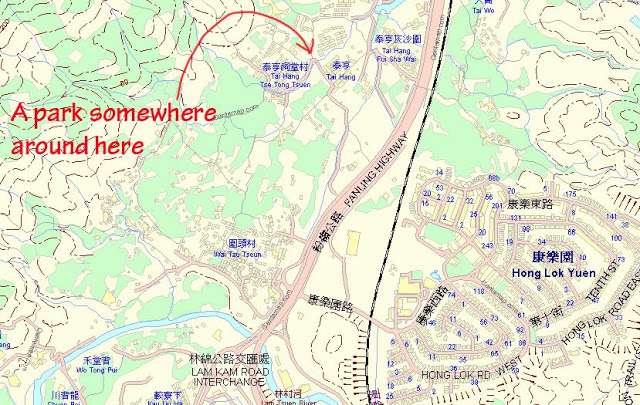 Hare says: Meet at the playground as per the usual place. Hope to see lots for an absolutely ball-breaker of a run! ;o)

Just in from Luk Sup Gow: If you see this scene and imagine it’s dark, you’re in the right place. 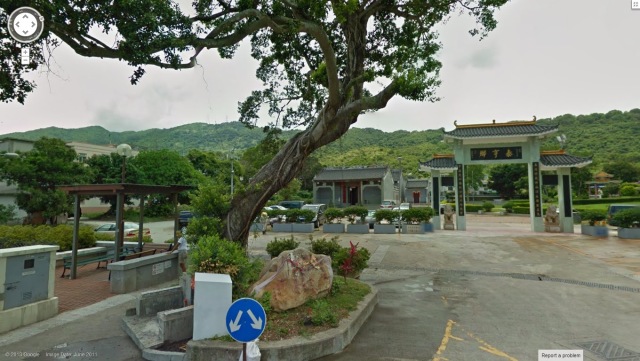 By Golden Balls
Where’s the run? Shing Mun Reservoir? Whaaaat?? Seemed to be the mantra for this run. A map had been sent out, guesswork more than anything else, and which turned out to be correct, but it wasn’t good enough for Velcro Lips, who’d huffed off home with a swingeing email. Ouch! Must do better.
There was nobody around at the guessed-at start, so I rode my taxi to the main dam but found nothing. With the taxi gone I walked back towards the barbecue pits in the dark. Monkeys howled eerily and skittered in the trees and along the reservoir road. Talk about creepy. I was glad to see the convoy, which had arrived after me, parked up at the pits. The monkeys were still howling and gibbering all around as Moonie and I armed ourselves with stout sticks to ward off attacks from our country cousins. Eunuch gave his briefing as the fuzz drove slowly past. “They’re not gonna do us for parking, are they?” says Moonie. Then, screwing up his eyes and tapping away with his white stick, “I didn’t know it was a no-parking, zone, your honour.” Thus we set off up the steps towards Smuggler’s Ridge –
It was good to be back on the Northern. I’d done a couple of hashes in England, good interesting trails, but where the hares (never just one but two or three) shepherd you around, pop up offering shortcuts, insist on several hash halts (“to keep the pack together”) and generally behave too bloody helpfully. Go West, who I’d visited in Devon, revealed that his local hash hides sweets in the bushes at their halts. He wept openly. So it was great to be sent off into the pitch black night of screeching simians, knowing that nobody would give a damn if you fell down a cliff or were torn limb from limb by crazed macaques. On out!
Trail went up towards the ridge, then veered left off the path into the forest, then into the WWII military tunnels. G-Spot, with whom I was perambulating, led me out of the first tunnel and into the shiggy climb, whereupon he disappeared into the night. I was crap and took ages to climb the shiggy – never saw anybody again. Except the hare, who inexplicably popped up near the second tunnel section, a long one in a maze of subterranean routes called Oxford Street and Shaftesbury Avenue and so on. Without a torch it would have been creepy, but as it was all I saw were two chit-chats and a long-legged centipede.
Emerging from the tunnels I got lost for a bit before finding trail down a slippery shiggy slope emerging near where the MacLehose hits the main dam, and took the wimp option back to the pits. Everybody was already back from the rambos, and I had to endure scurrilous accusations of having “laid” my own markings on trail. Also, while we were out, a gang of bright young things in short-shorts and singlets had colonized the pits and were blackening chicken wings on sticks. As a couple of them wandered away into the shadows Eunuch was heard postulating that they were “carpetting off”.
Mango led the raucous circle, which was hilarious, but the only thing I remember was when hare said he was about to deliver a sermon, but Mango thought he said he was about to deliver semen, so he kept his mouth shut. But then, he also talked about a big snake coming across his face (on a Sha Lo Tung run river-swim section). Glass houses I say. And rocks. Lots of them.
A splendid subterranean effort and good shiggy from Eunuch.
Present: Eunuch, Mango Groove, One Eyed Jack, Moonie, Golden Balls, Luk Sup Gow, G-Spot, 99 monkeys.
Next week: Moonie

Apologies for the lack of posts here – I’ve been away for a month. Normal service is now resumed, at least until the AGM on November 6, when some other sucker can be voted (que?) into the job!

Talking of the AGM, here’s a heads-up: It’ll be at Fanling Police Tactical Unit, the boot camp for our beret-clad boys in blue. Here, they run mountains, lift weights and learn the joys of body searching. We, on the other hand, will brazenly bring our birds and battybitches onto their turf, drink beer and show how real men embarass themselves. Then we’ll go for a run. Afterwards there’ll be a police (not Shaffi’s) curry. Ex-battyfuzzman Gunpowder Plod is behind this extravaganza, but the clumsy oaf is in hospital going under the knife today after tripping over some dog and rupturing some tendon or other. Let’s wish him a speedy recovery so he can be at the AGM. Because we really want that curry and we can’t have it if he’s not there. Get well soon, GM! In the meantime, RA Mango Groove will be setting the run.

You’d think we were visiting some high-security paramilitary training establishment.

Back to tonight’s run. After a brief chat with Eunuch, I believe he’s using the shelter a few hundred metres before the main dam, comme ca: 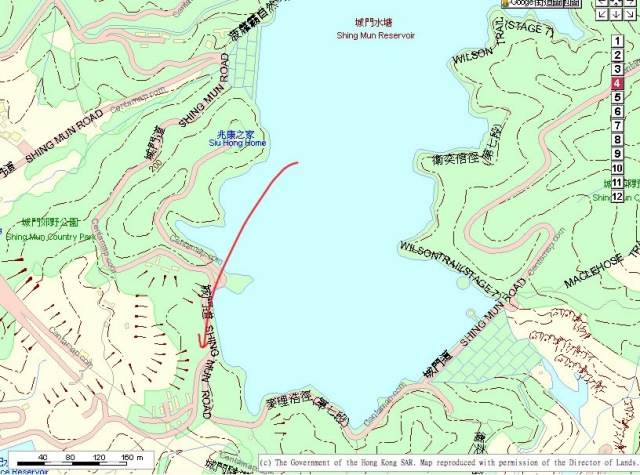 But I could be wrong. And he advises bringing a torch. I wonder why… 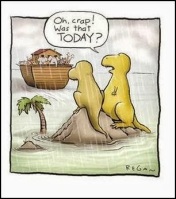 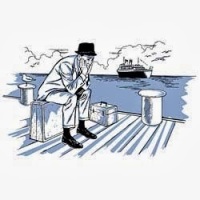 The NNT mob are a very welcoming hash indeedy! Piss Perfect in his Hong Kong days (and even now!)  loved to regale us with stories about hashing with the Northern NT/Shek Kong mob …I think the words were “wild”, “don’t give a flying f**k about politics” and “just love to take the piss as well as drink it!” (I think he meant that figuratively but after the Kam Tin run of the previous week when there was no piss and only six cans of Eunuch’s non- alcoholic beer to drink…who knows!)
So having been made persona non gratis at our very own Little Sai Wan hash, for reasons ranging from “no personal invite” to “missing the boat list”….(yes, it was a boat hash!), three of the family – Lost In Space, Octopussy and myself – were delighted to take the opportunity to run with the real hard corps hash of the Northern New Territories, where rumour has it that they eat razor blades for brekkie on the day of the run!…even if we did have to venture to the remote hashing territory of Route Twisk, far removed from our normal night hashing areas!
Worried we would be late for the run starting at the Chuen Lung barbecue pits, which was supposed to start at 7.30pm, we three musketeers met up at Tsuen Wan MTR at 7pm and found a taxi driver who naturally could not speak English (being in the wild west environs!). Fortunately Velcro Lips had emailed the run info and hare’s contact details, so very professionally a map was emailed and printed…thanks Luk Sup Gow!, and we got to the run site at 7.15…to be greeted by…nobody!!
This naturally made us a tad nervous and we did not like to get out of the taxi in case we were mugged on this lonely road…. but then we espied a check outside the “park” entrance and knew we were in the right area…but had all the pack gone?
I had the hare’s two mobile numbers, so armed with those I duly rang. No connection…no answer…so would a smoke signal work?
In the meantime, I got a phone call from Tangerine Dream to ask where I was and where was the hash? Well she was apparently at Kam Tin with the beer, unlike last week’s NNT run I hasten to add, but unfortunately for her this week’s location was not Kam Tin! 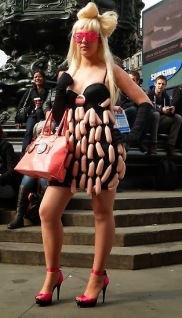 Finally a car appeared and yes it was the hares, with Beer Tits literally oozing sausages everywhere. A few more – hashers, not snags – dribbled in: Mango, Salesman, One Eyed Jack, Dingaling, G-Spot (minus Velcro!) and Eunuch.
Tangerine Dream and Ginger Moon did make it to Route Twisk to deliver the beer, but did not stay for the run…what fab service! We were then given the “complicated” run instructions. “The checks are checks, they will be teed if the wrong way. I’ve taken a half day off today to set the run, so the trail will be very well-laid” and then the pack was off!
Down the road to a check….across the road and up a gravelly dirt road…and this was just the beginning of the dirt trails. As I had not hashed in this exact area before, I had no idea where we were! One very memorable section included the unpredictable 5-way check that bamboozled the pack for 20 minutes. Our very own Octopussy was happily leaping around everywhere searching for trail, uphill then downhill…hashers were all over the place with Dingaling and G-Spot tearing in from different directions…Mango cursing the hare and saying “Why have a 5-way check? We can’t even count past 4!” One Eyed Jack turning himself inside and out, Eunuch going up and down, down and up trails with his usual  boyish enthusiasm…from memory no trails had been marked off.
Having thought that all trails had been covered but one, off we went with Salesman, sure were were on a winner. I Iearnt new expressions like “There are going to be many on the angry bus!” (this hash even speaks another language) as the elusive trail remained even more mysterious to find. The angry bus was getting even angrier!
Suddenly there was a shout of victory and trail was claimed. As it was, Mango was right about the NNT mathematics ability…there was a deceptive fifth trail (or was that a sixth?) that nobody had gone down…..(It actually transpired that Lost In Space had gone down that trail, but being a “spoiled city hasher”, did not go far enough…)
After all that excitement, it was trail running intertwined with rocks…Octopussy was in her element in this virgin territory, so we did not see her for dust after that! With G-Spot and Lost In Space for company i was not going to push my luck over the rocks and end up in a hospital shack like I did the last time I had run on a hash with G-Spot in the Philippines. Then it was onto the catchwater, which I recognised as part of the Full Mountain Marathon King of the Hills trail, across the road and up steps to a village area where Captain Pubic Hare and I had set a Free China Hash many many moons ago, then a very pleasant run on home through farmland, streams and Chuen Lung village. 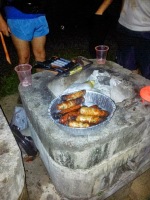 Well done the hares for setting a very interesting run, for we LSW folks in “foreign territory”,  and with lots of camaraderie on trail…AND we had finished the whole trail…apparently a feat in itself compared to the previous week’s run!
Hash cash was collected with Eunuch declaring that yours truly should be made to pay the male fee of $50 with all the beer I would consume! The female fee was a bargain at $20, which included snags, mushies and buns that were cooked on the barbecue while the circle entertained all. “Octopus Card”, as she became known, got a few downdowns herself for her enthusiasm and Lost In Space did not get one for…being lost! So all in all a great night.
Thanks to NNT hash for being such a friendly and humorous bunch and to the GM who was most welcoming and making us persona gratis!
The Different Kinds of Gratification
1. Running gratification 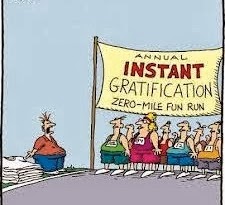 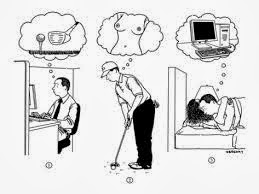