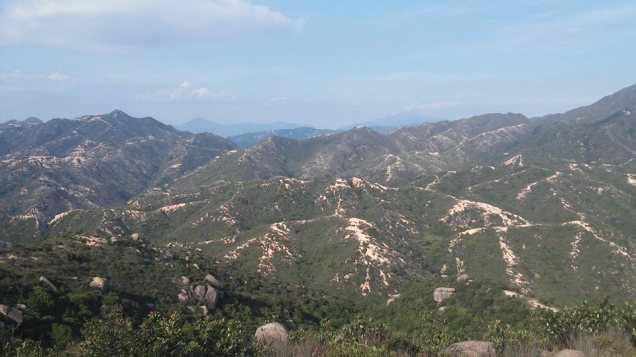 It was the Northern New Territories Saturday Run No 2, and west of Castle Peak the sun beat down mercilessly from a gloriously clear sky over the barren hills and ravines of decomposed granite and the black-sand beach of Lung Kwu Tan. Hare Stingray had promised a rambo trail, a wimp trail and a walker trail. As it was so hot that everybody walked parts of the trail, the walker trail was cancelled and the rambos cut back to 15 minutes longer than the wimps. No matter, the trails were, as promised, sweet and virginal (without the sweet) and challenging enough to satisfy the most masochistic hasher.

The pack gathered just above the beach, whose black sands had attracted legions of photographers as well as the usual complement of garbage, and set off down the road in the direction of Black Point.

Catch Of The Day was caught out on a check at the pink dolphin lookout but soon resumed control at the head of the pack with Mango Groove. Salesman, One Eyed Jack, Walky Talky, Ah Duk, Stunt Double and Hoover all negotiated the next obstacle – a fence – leaving slowcoaches Golden Jelly, Plod, Screwless and GB to manhandle Malu the dog over the fence. Thus one pack became two. Across the road and past the yards, and trail started heading uphill. 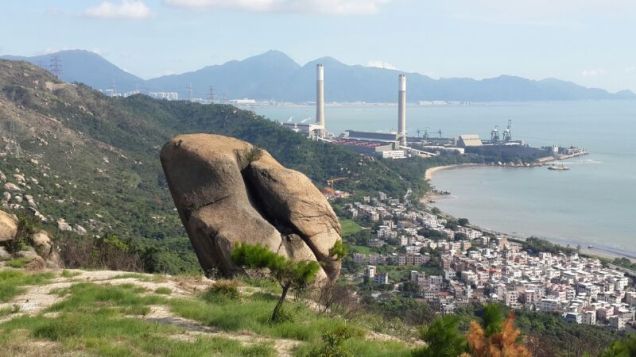 The views were terrific, but so was the sun. “By golly it’s warm,” said Screwless. Malu was sporting a fine white cotton tunic fashioned from Golden Jelly’s uniform, but even the normally rambonctious canine was flagging in the heat and lack of shade. Hashers started taking time out. 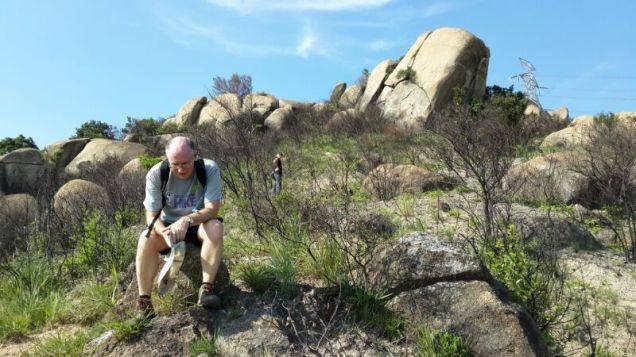 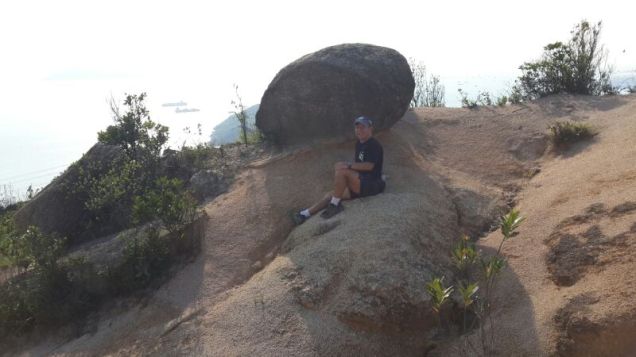 GB was starting to black out so slowed to a snail’s pace and as a result was caught by a hiker, a member of Yuen Long Distance Runners Club, who’d been snared by our markings. Little did he know what he was getting himself into. Then we reached the fixed rope up a steep granite slab, which was a doodle really but added a point of interest in the relentless uphill slog. 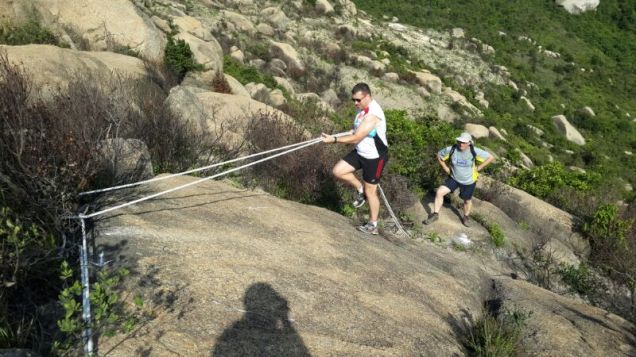 Far above the puce of Catch Of The Day’s ensemble flitted in and out of vision on the ridge line. Ever upwards, seeking out places with a bit of breeze in which to luxuriate as slowly but surely the top got nearer.

The view from the top was wild, and we remembered Stingray’s warning from Wednesday night (but omitted before this run): He’d tried the run out on the Hong Kong Hash on Monday and one geezer thought he’d short cut back, but got totally lost, eventually being rescued by the Fire Services (complete with ambulance waiting) at 1.30 in the morning, long after the hare had scarpered. And who would wish to be associated with such shame, the only other recorded incidence of a hash calling out the authorities being the 2003 debacle when Aloha Baby got lost on the Shek Kong Hash. Oh the ignominy. But we also remembered that this was where the French hiker disappeared years ago, never to be found, not to mention other life-threatening scenarios. 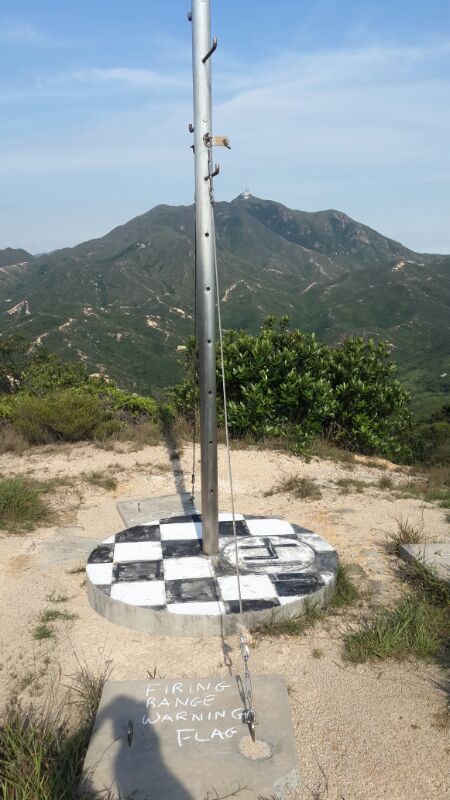 Here’s a video clip from the run:

Trail went down, down the slippery granite marbles to – a swamp. Our hiker friend seemed most disconcerted to see us wading straight through it and stopped to take his shoes off. Then there was another little climb followed by a contour path, quite tricky and overgrown in places with boulder obstacles too. We thought it might be part of the ancient Lung Kwu Tan – Tuen Mun road (Lung Mun Ancient Trail). By now the sting had gone out of the sun and we could enjoy the late afternoon light and relatively benign terrain. After a couple of stream crossings, welcomed by Malu) we started to hit civilisation and soon were trotting through the village and back to the beach. Podium finishes went to first in Mango, second COTD and third Ah Duk. Backmarkers were GB, Jelly and Screwless.

After consumption of much liquid refreshment, and a cooling off dip by the large man Golden Balls, 69K arrived on his bike, plaintively asking if there was a riding route over the Castle Peak ridge back to Yuen Long. In your dreams pal. Non-runners were in evidence: Luk Sup Gow, Beer Tits, Mast Marina, as well as ankle biters Travis and Phil. Salesman presided over the circle, but there was almost as much entertainment on the beach as photographers galore set up to take the same picture. Meanwhile, some chicks took it upon themselves to clean the beach right where we were. Thanks! And as the sun sank over the watery western horizon, the excellent Saturday Run No. 2 came to an end.

Pictures and video by Walky Talky, except the top one (Screwless). Next Saturday run: 23 August. 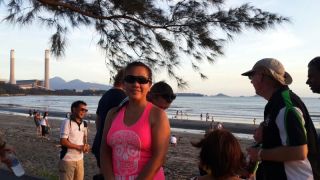 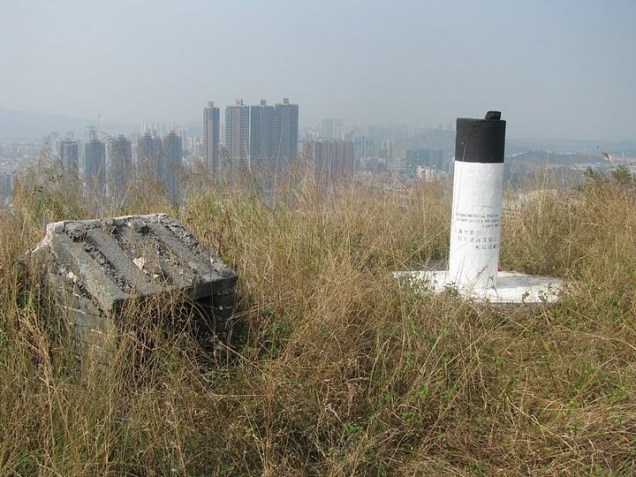 Walky Talky recycled her run for Shek Kong of a few months ago, but with a better finish. From the park opposite Yoho trail went out along the nullah, under the highway and turned right. After about half a mile a check took us left into the village and soon we were pushing through high overgrown vegetation on an invisible concrete path that it was easy to miss and roll your ankle on the edge. Then followed a bit more village trail during which I encountered Eunuch coming back from a wrong check, followed by Catch Of The Day, Kiwi and Liberace. Dingaling, Mango Groove, Stingray and One Eyed Jack had solved the check properly and were well ahead. We started to climb up through the graveyards and grasslands until gaining the ridge. It was hot, humid and very slippery underfoot, but great views and a cooling breeze on the ridge made up for it. This is a splendid little trail, seldom hiked despite its proximity to Yuen Long. The trig point was gained, then a slippery descent and return to the start through the villages. GB short cut, meaning that after his long cut on the Shek Kong run he has yet to complete this trail. Kiwi went missing but some gent went out to guide her home. Non-runners Fartypants, Overdue, Sam Miguel, 69K and Golden Jelly turned up for the circle, conducted by Dingaling in the absence of the committee seniors. A splendid trail by Walky Talky.