The hare and SP Crash Test Dummy even put on a special A to A trail for us in deference to the drivers, while LSW started near the MTR on an A to B. Trail went out along Tai Wo Hau Road and around the houses and footbridges of the bleak urban area. An aura of foreboding. Is this going to be a crappy city run? But no: on Castle Peak Road trail went up some steps. And up and up and up. Then when you thought it had finished it went up again. Whither trail? we pondered as we dragged our aching limbs ever higher. Suddenly we were on Smugglers’ Ridge with no idea why. At a check, Liberace went a long way downhill before Eunuch called on-on further up the trail, but Liberace disappeared into the blackness yelling, “I’m not going all the way back up there. F*ucking guy!”

Then we were in the tunnels of the Shing Mun Redoubt, beloved by Eunuch and be despised by Mango, who “got the willies” in there all on his own as the bats flew at him. The route was straight down the main tunnel highway ignoring the turn-offs, much to Eunuch’s disappointment. Then it was back to Smugglers’ Ridge territory and all the way down to the Kwai Hing park we started from. LSW’s Cheesy Flying Fox was first in by a country mile with Eunuch taking the Northern honours ahead of shortcutter Liberace, One Eyed Jack, Stingray, Mango, Ah Duck and latelatecomer Golden Balls, who took one look at the stairway to heaven and decided to do a “recce” instead.

We got back to find LSW had appropriated our esky and ice because their ice had melted and their beer was warm, but we didn’t care because we’d had a good run. The hashes mingled for a while, but not too long as LSW had all had showers and we stank. After they departed for the restaurant we hung out in the darkest corner of the park, chosen by COTD for its particular aroma of wee and the destitute Al Qaeda guy on the next bench , who kept eyeing us suspiciously from behind his cardboard boxes. 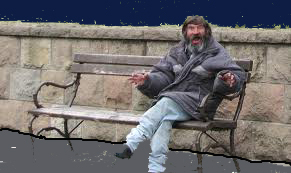