The Saturday Run No. 3 was held on a gloriously sunny afternoon at sunny Sunny Bay with an early start to accommodate the partygoers. It was a decision that would turn around and bite the hare on the arse. With Disneyland just round the corner, the pack got into character, comprising Dumbo Dram and his virgin mate Hetero Harold, Mickey Mango Mouse, Stinky Stingray Pete , Sher Stuntdouble Khan, Happy Hoover, The Incredible Shrinking Violet Velcro Lips, Donald Duck, Golden Grumpy Balls, Gunpowder Goofy Plod and GM Salesman the Sheriff of Nothinghome.

The pack assembled at the start moved by first arrival Goofy to a thankfully sniper-free grassy knoll under the shade of several flowering trees. Beer and softies were iced while we awaited the return of Jack Sparrow, who did not stagger in from setting the trail until 15 minutes past the start time, nicely stewed in his own sweat and mumbling even more incoherently than he normally does. Sparrow later admitted to laying a similar trail for the lesser Monday night lonely men’s hearts club (gay) hash marked with pretty red ribbon. So we had a regurgitated and shortened version after the hare had almost collapsed setting it.

Dumbo translated the briefing and after a quick flash by Grumpy, we were off. Still very hot but nice and shady under the trees to start and then through a subway under the MTR towards the hills. To steps. By now the FRBs in the form of Donald Duck, Mickey Mouse and Sher Khan were well away and off down the service road towards Tung Chung and… a check-back.

Nobody got this right. We should have gone back up the road to a gap in the hedge but, oh no, the FRBs called the whole pack on through a dank and dirty overgrown ditch to some steps. Here Stinky Pete guided Goofy into a large wet hole assisted by a push from Grumpy.

Then it was up and up several flights of steps to a check. It is now suspected that Mickey solved this immediately, having done the lonely men’s hearts club hash on Monday. The trail led into some tasty shiggy uphill and down t’other side to another check. Then straight on to an abandoned school house and a further check. The trail led left and down from here to a rambo-wimp split.

Only the Incredible Shrinking Violet chose the wimps where she encountered a sweaty and spider infested Sherrif, a late arrival doing everything backwards as usual.

Dumbo, Hetero and Grumpy complained that they never saw the split, preferring to follow calls of on-on rather than follow trail. Happy had little difficulty shaking off Goofy and Stinky following in the wake of the long gone FRBs.

So with the Sheriff the last in with most taking about 40 minutes, we lounged about on the grass, jealous of Happy, Sher Khan, Grumpy and Dumbo who had grabbed some chairs from the intimidated disabled octogenarian toilet attendant nearby.

After much lounging around finally the frantically scribbling Incredible Shrinking Violet could take no more and forced the Sherriff to start the Circle. Which he promptly gave back to Violet for the ritual humiliations, and then it was hi-ho, hi-ho, it’s off to the party we go. 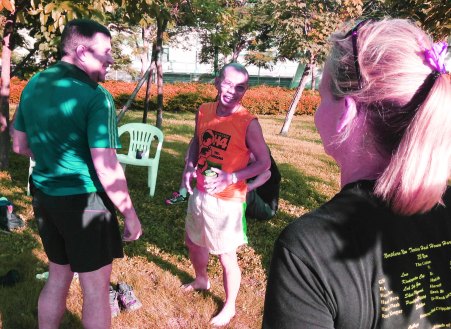 Tell It To The Marines

For the second week in succession the run, supposedly in a part of Kam Tin that isn’t Nobble Park, was rained off. Golden Balls got a 6pm phone call from a more than usually stressed-sounding Big Moany: “It’s hopeless. Trail’s being washed out as I lay it.” “You’ll just have to live hare it then, won’t you,” came the equally stressed reply from GB, who was desperately trying to finish his work in time to keep his appointment with a gang of newbie hashers and bring them to the much talked-up run.

Five minutes later, Big Moany was back on the blower. “Can’t do it. Run’s at Nobble Park. Oh bloody hell, I’ve just upset a bag of flour in the car.”

GB was not sympathetic.

And yet, an hour later, under a sky remarkable for it’s lack of moisture or anything resembling rain, more than a dozen hashers and protohashers descended upon the “pagoda” round the corner from Big Moany’s gaff. Fartypants and Walky Talky with Dylan, Dram, Ah Duck, Liberace, Catch Of The Day, Mango Groove, Eunuch, Golden Balls, One Eyed Jack and a trio of strangely young-looking men peered at each other through the sodium glare of the streetlight. The three young men had taken a taxi all the way from the Hyatt at Chinese University, and were marines, or sailors, or both – two medics and a PTI. They looked impressively fit and…young. Tim, Levan and Doc Lick-a-lot (an Okinawa hasher) were about to be introduced to hashing, Northern-style.

The run was of necessity not very long, but it was quite clever, disorientingly so. At one point Fartypants was encountered running the wrong way along Kam Sheung Road: “I used to live on this road but I’ve no idea where I am!” There was even a short shiggy section to muddy the shoes, and various bits through mazy villages and along broad, sweeping nullah roads. The pack soon fractured into two chunks, Ah Duck, Liberace, Catch Of The Day, Mango Groove and Eunuch getting a jump on the rest, with Mango romping home first (a factoid he was not going to let anybody forget). As most of the second group came home in a clump a disgraceful sprint ensued, with Tim holding off a surprisingly nimble One Eyed Jack ahead of Doc and Walky Talky. The shortcutting Dram strode in last. Justice.

The usual makeshift circle ensued and then it was off to the Kam Tin daipaidongs for most of the pack. The three visitors were heard to enquire where the action is in Sha Tin. How on Earth they ended up there is anybody’s guess, but as we dispersed into the night COTD was seen giving her number to them so she could show them Wanchai the following night. Hope they got out alive.