Honestly, it was all too much for Northern NT hashers – not known for their cerebral chutzpah – to take in. Hare Gunpowder Plod delivered his briefing to the dozen or so hashers gathered at Lung Mei in Sai Kung by unveiling alien trail markings: arrows in some colour the same as the ground, half arrows, full arrows, checks with Mickey Mouse ears, Xs for check backs…a collective groan went up punctuated by cries of “Why can’t we have normal markings?” “You’re in Sai Kung now, so fuck off!” snarled the hare, adding that there would be “lots of shiggy”.

So off the pack went, through a village parking area, up an embankment, over a concrete wall and straight into – shiggy. 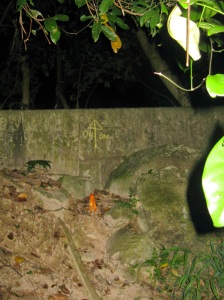 This sorted out the specialists from the coordinationally challenged, with Liberace, Eunuch, Mango Groove, Catch Of The Day and a visiting Inflatadate bouldering their way effortlessly up the stream bed, dodging vines, leaping from slippery rock to muddy bank, traversing round big trees and on on into the black. Behind, One Eyed Jack, Stingray, Yan Yan, Golden Jelly and Golden Balls made heavy going of it, with the elephantine GB heard to proclaim, “Bollocks! My race is over before it’s begun!” Indeed, so slow was he that Golden Jelly waited for him – a gentlemanly deed that was to have significant consequences.

Meanwhile, at the front of the pack Liberace got every check wrong, even the super-easy ones in the shiggy. The climb out of the stream bed had  marked by a sort of traverse on rocks to avoid a massive nephila spider, with Mango slicing his shoes on the rocks as he gibbered like a girl. Eunuch solved the check at the top of the hill, the one that was to confound everybody behind, with One Eyed Jack, who had almost caught the frontrunners, “marking” the check. Trail went straight down the road to a check back marked with an X, which caused Liberace to go into an apoplectic fury. “It should be a #&*@^%!!!” he raged. It was finally solved by One Eyed Jack down a slippery defile, across a stream and past some abandoned village houses via chest-high elephant grass.

At the back of the pack, after battling out of the stream bed, GB and GJ found themselves on a single-track road going uphill, eventually coming to a bizarrely mismarked check. They set off uphill to the right as indicated by the rock placed to break the check, to arrive, after a long climb, at – a T. “Smells like Kowloon markings to me,” muttered GB darkly, and indeed it had been gay Kowloon wannabe One Eyed Jack who’d committed the cardinal sin of mismarking the check a la Kowloon Hash protocols, a sin for which he was to be roundly condemned by a baying pack in the circle.

Shortly after this was a two-way split, one way straight ahead on the road and another left into the forest on no recognisable track. Having decided to press on along the road (because only an idiot would push into shiggy that dense), the Goldens were startled by distant panicky cries from deep in the shiggy. “Is anybody there? Help! I can’t find my way out!” Eventually Yan Yan emerged bedraggled from the thicket after pushing her way through the shiggy towards the torchlight. She had called her boyfriend for help. “What do you expect me to do? Dunno where you are. Your bed, lie in it,” came the unempathetic reply.

Her travails weren’t over yet. On the concrete tracks through overgrown paddy, Yan Yan somehow contrived to drop her phone. Twice. The first time it went down into the muck and weeds in the paddy and necessitated a three-(wo)man search. The second time, seconds later, the glass screen shattered on the concrete into a network of cracks. It’s now thought that she’ll stop trying to carry it in her knickers on vibrate mode.

There just followed a few more contoury shiggy stretches with some bamboo forest thrown in before the lights of Lung Mei and On Home were seen. A fine run, with a pizza delivery to boot, and even a visit by the rozzers to move us along, but who were swiftly moved along themselves by ex-rozzers Gunpowder Plod and Liberace. We know our rights! Occupy Lung Mei! 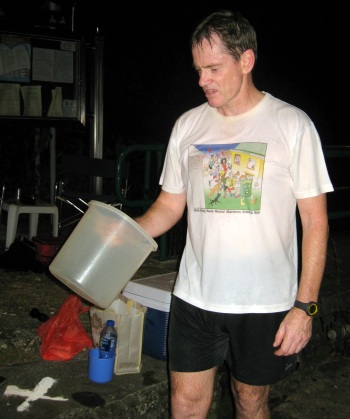 Inflatadate – not impressed with the showering facilities

Drunken arse Eunuch and some bloke