It was 7.45 and there was still no sign of Eunuch, despite him living just down the road. “We have to wait for him, he’s got the beer,” pronounced Mango Groove.” “But he left the eskies at Din-Din’s place last week. Did anybody pick them up?” came the slightly panicked response. Then Eunuch arrived – on a bike!

“Ruddy car’s broken again!” he raged. “Good job someone else is doing the beer tonight, isn’t it.” Then, in an admirable display of schadenfreude came an outraged, triumphal “Nobody’s done it, have they!” Too late to do anything about it. The run must start.

Hare Liberace promised a 1.5-hour outing with markings in chalk, flour and bog roll, so the pitifully small group of five who bothered to turn up – Mango Groove, Stingray, Golden Balls, Catch Of The Day, Eunuch – set off with high hopes. Trail initially led south and into a housing estate, and then across a pedestrian bridge over the railway at Sheung Shui station. Plenty of checks to keep the pack together. Then it was north along a cycle track until a cunning checkback flummoxed everybody. Trail was eventually found through a park and then there was an intricate bit of weaving through villages until the rambo-wimp split showed. By this time GB had fallen off the pace.

Rambos went north-west into low hills and some shiggy, where Stingray fell away. After cresting the peak overlooking Lo Wu trail led back south to the split, where rambos followed the wimps trail home. Controversy raged as the lift up to the pedestrian bridge in the industrial area  was approached by the leading trio. Eunuch and Catch Of The Day dived in as the doors were closing, leaving Mango Groove stranded. “All I could see were these hands giving me the v-sign as the lift closed,” he blubbed plaintively. “And I’d worked so hard to keep up with them…sniff.”

Prior to this, on the wimps, GB encountered latecomer One Eyed Jack on his characteristic short cut, approaching the lift from completely the wrong direction. “Crap markings,” he snarled. “Two arrows pointing at a wall and then – nothing!” Honestly, any excuse for a short cut.

Meanwhile Golden Jelly had turned up and did her own run, while Desperate Dan turned up  to drink beer, of which there was just a few tubes that Liberace had begged from the local shop. Then 9 Ignorant Cox arrived with the eskies crammed chock full of booze. Saved! 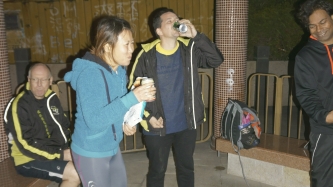 “Look at them all, having fun when it was crap markings!” 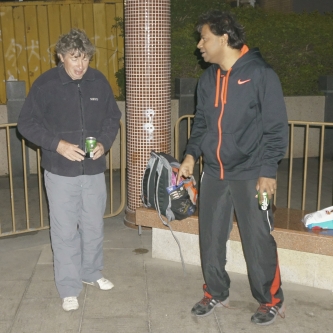 “What happened to hash cash?” “Well…” 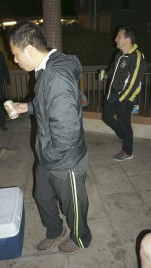 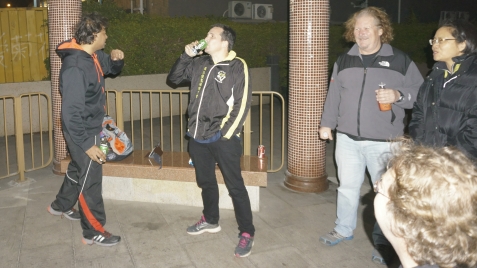 For pretending his car was broken so he could chug booze.

“Next time, make sure there’s beer.”