The confusion at Hong Kong airport set the tone. Having bussed our way to Gate 506, we were shepherded back onto the bus to be directed to Gate 30. Manila was not much better, the party heading off in many directions to forage for food and drinks, ATMs and moneychangers. All was resolved with a withering look from Brown Owl (Velcro Lips), who after muttering something along the lines of “it’s like herding cats” got us all onto the two minibuses, each laden with beer. This was the April’s Northern New Territories Hash Away Trip then, to Puerto Galera on the north coast of Mindoro. Venturing out from Hong Kong were Luk Sup Gow accompanied by Beer Tits and Phil, Fartypants, Walky Talky, Anus the Horrible, Sticky Apid Bottom Exudate, Golden Balls, Golden Jelly, Velcro Lips, Chris Higgins, Hard Up, Dingaling and Overdue. 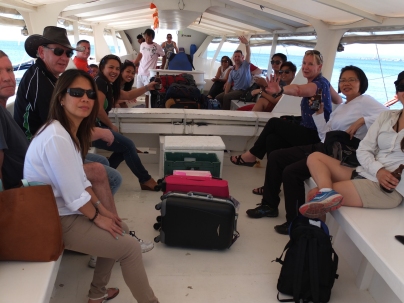 The two-hour minibus ride and a gentle ride in a banca, stuffed to the gunnels with coldies by PG and Hong Kong hasher Mike Barker, brought us to the pier and our respective digs. Some had chosen Portofino, some Blue Ribbon, which had the added benefit of late-night sing-alongs. The weather was marvellous, though perhaps hotter than usual due to Typhoon Mysak, which had threatened cancellation of the trip but was now disappearing up its own windy bottom. We convened at the Barrel Bar, and then on to the Point Bar, having gathered up waifs and strays such as BJ and family, Pink Poofter and Hash Bike and her cousins along the way. Curry buffet dinner at El Galleon, and more booze, somewhere or other. Up bright and early for the PG Hash’s 1,300th run on nearby Verde Island. T-shirts, bananas and badges were handed out in Cap’n Gregg’s (Sticky Apid Bottom Exudate managed to score one that had been printed back to front) but following a mix up with boats we were delivered to the island a good hour after the first runners. Undeterred, we set off anyway over a series of trails though pleasant farmland and orchards, ending at the beach. Most of chose the walking option, but some, such as Dingaling, undertook the full run which involved a series of steep steps down to a beach and then back up again. 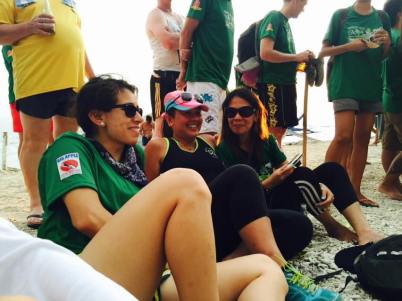 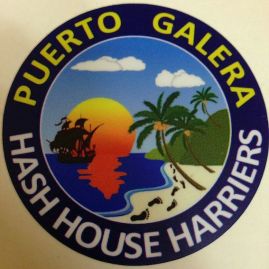 The PG lot conducted the circle somewhat differently from what I’ve seen before – silly songs, down-downs with full beer bottles (not that anyone managed to down one), but little in the way of being called out for crimes committed on the run, or beforehand for that matter. But fun nonetheless, our lot behaving like pirates and making off with the PG stash of gin juice, as well as teaching them how to sing properly. After that we repaired to a bar, where I was castigated for experimenting with the cocktail menu and accused of being some sort of seedy Del Boy character. I rose above the childish criticism to enjoy my Toilet Duck and Bacardi, oblivious to the smirking derision of the lower classes. Brown Owl’s meticulously produced spreadsheet had Sunday down as a free period, so I elected to go diving with BJ, which though fairly dull was a welcome chance to get back under water again. BJ then had the great idea of the two of us kayaking to the Beach Frog Bar at White Beach to meet up with the rest of the gang, who had elected to spend the day sightseeing and experiencing local culture and lunching at Puerto Galera Yacht Club like a bunch of girls. The 10 kilometres to the beach proved to be somewhat arduous, not least because my kayak was full of water, which I didn’t discover until we arrived, much to the piss-taking delight of all. After a few cold ones at Alan Paris’s bar we headed across the headland to Luca’s for a pizza, braving talk of aggressive monkeys. Golden Jelly took a tumble on the way, and hobbled in bruised and bloodied and supported by a wheezing and spluttering Golden Balls, who’d hatched some sort of virulent lurgy and, frankly, looked like shit. 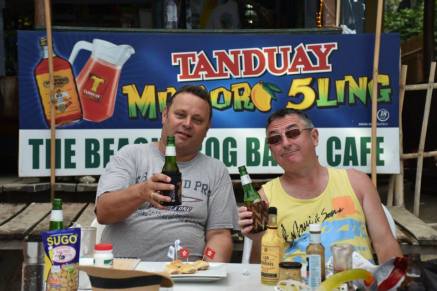 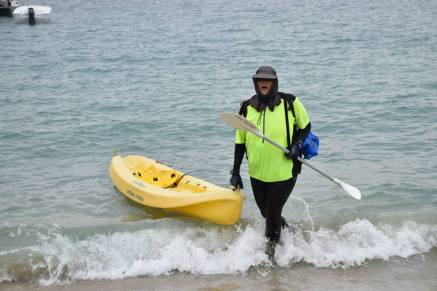 Back to base in the jeepney, in which serving the gin juiced proved to be a tad difficult on some of the more violent turns in the road. And so to bed. Monday was reserved for the N2TH3 run 1686A and though BJ and I went for an early dive first, to be blown around the notorious Canyons, run we did. Set on a beautiful stretch of wild coast well to the west of White Beach, and hared by Mike Barker and a local hasher whose name I don’t know, it took us through bucolic paddy fields, past angry cows, yapping dogs, through a stream and then a wedding, and on to a gorgeous beach for a welcome dip. 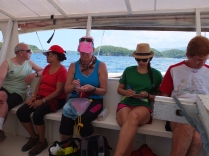 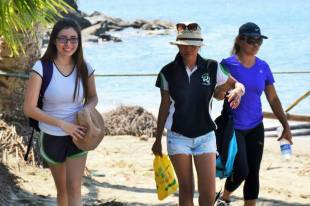 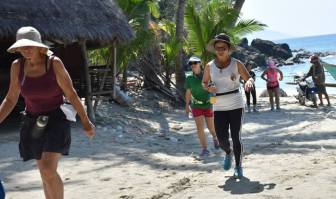 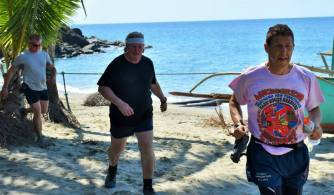 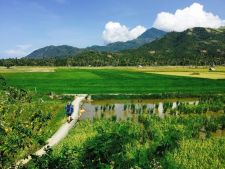 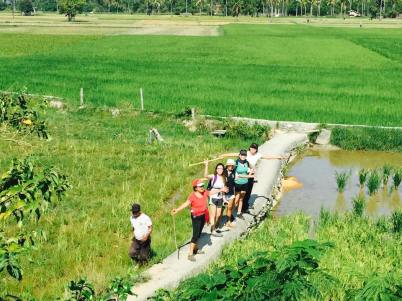 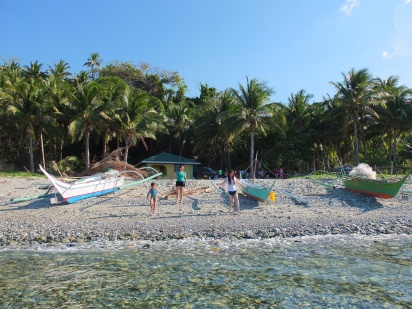 The circle included a few of the PG crew, whose discussions about pension plans and Viagra entertained the masses until it was time for the business. Down-downs I recall include one for Golden Balls for sleeping through the Arsenal game, another for him for being a miserably sick git, Dingaling for being a wuss and not diving, Velcro Lips for wearing new shoes, Dingaling again for telling everyone that she had new shoes (though he proclaimed his innocence), BJ for breaking a bridge and bringing the local economy to ruin, and a few for me for various kayak, diving and cocktail crimes. 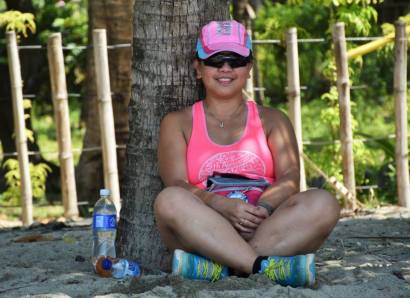 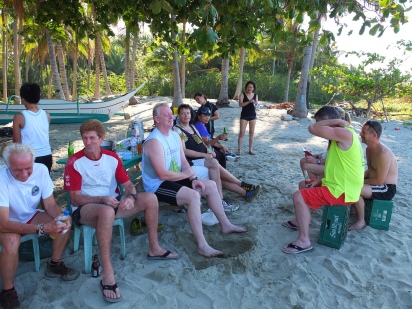 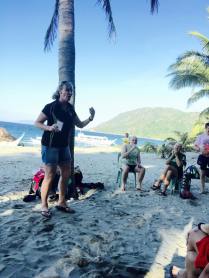 Back in the banca again for a steak dinner with Mike, and three cheers for Brown Owl for her ability to herd cats. An excursion to view the wildlife of Sabang followed, which proved to be most interesting and highly educational. There was still time for banca snorkelling (being pulled around Mike Barker’s coral garden by a banca wearing a mask and snorkel) where GB, unable to breathe, decided to climb back on the banca and very nearly upended it. Then it was the banca return to Batangas over a choppy sea, the bus, the plane. All turning up more or less on time for the Velcro roadshow. A splendid, sporty, boozy time had by all, Kudos to Velcro Lips. Mentioned in dispatches: Mike Barker for being a superb all-round fixer and top chap. 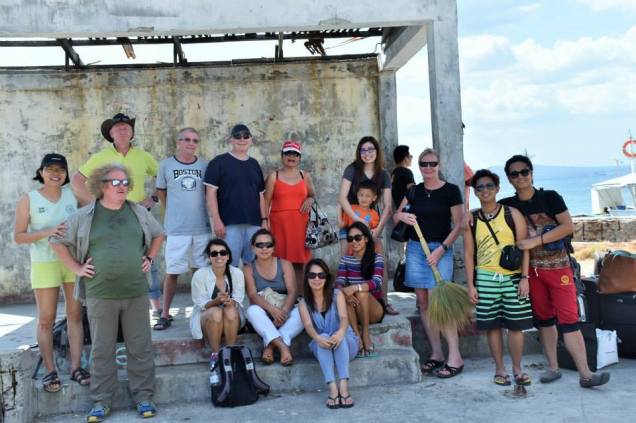