So we set off from Lam Tsuen Valley in bright sunshine, Gaele Says No, Canton Klap, Popeye and myself, heading for Yau Tong station for what the hare promised was a “wicked” run. “The start will be marked in chalk from the station exit” said Gaele Says No. Arriving at the station we picked up new N2TH3 runner/virgin Stewart but no chalk markings as it was raining cats and dogs! As we dithered about wondering what to do Dram and T Bird turned up, and after some deliberation we set off up the hill in the pissing rain looking for the park and the start. Arriving at the park we found Stingray with the beer and Penile Dementia. Eventually GM Velcro Lips, Golden Balls and Liberace turned up, and then the hare arrived. Did he have the major neck extension that everyone was expecting, did he bollocks; with a huge smile on his face he gave the briefing, “Well chaps there has been a sodding big thunderstorm and its washed out all the trail, so I will have to go out and re-set it, give me a 15-minute start, there are two trails, the rambos will take in all the historic sites, blah blah blah… oh and wait for Catch Of The Day, she’s on her way, don’t start without her”. Whilst waiting, Popeye was pleading with Billy Jizz to run the Rambos to no avail, but Billy Jizz did the next best thing and pressganged a reluctant Liberace into a baby sitting role. He can’t possibly run the Rambos, said Libs, pointing to the 6-year-old-sized Popeye. He’ll be fine, said Billy Jizz. Twenty minutes later COTD arrived and off we set back down the road towards Yau Tong station, where a check was found at the bottom of a flight of stairs. “It’s up” said COTD, “I saw Mango going up when I was on my way.” So up we all went. At the top runners dispersed in all directions searching in vain for the elusive trail. None was found. Back down the stairs and GB found trail heading up the road towards the hills, so who was that sylph-like, dark-clad figur, lugging a bag of flour and chalk up the stairs? can Mango be in two places at once or does he have a doppleganger? (Spooky action – ED.)

Libs was clearly doing a grand baby sitting job as there was no sign of him or Popeye, so both were still well ahead. Trail then took us on an excellent bit of shiggy, incluging a section of 6 foot high elephant grass, at the end of which we arrived at Pottinger Peak and the third and final gun emplacement. Trail then took us down towards Lei Yue Mun where we picked up Velcro and Dram, and past the seafood restaurants laden with all manner of sea creatures – including some humongous crabs – and then back to the start.

Velcro opened the circle welcoming back Billy Jizz, and virgins Popeye (yes, Libs successfully completed his baby sitting job and got Popeye back and on the podium) and Stewart, at which point Mango Groove in his role of Religious Advisor took over the circle and started to quiz Stewart. “So what do you do Steweart?” “I’m a horse vet, I work for the Jockey Club.” “So have you ever held a big, erect throbbing horse’s member?” “Err, maybe” stuttered Stewart with a wry grin on his face. “I’ve got it,” said Mango, “on your knees Stewart.” So knowing Mango’s reputation and with the thoughts of throbbing horse bits in mind, we were all fearing for our new runner. Would we ever see him again? So with Stewart on his knees, Mango proclaimed in his best Scottish accent (Stewart being Scottish) that had everyone rolling about in laughter as he sounded more like a Pakistani: “Henceforth Stewart, you shall be known as ………………..Red Rump!” 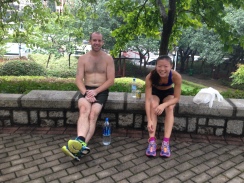 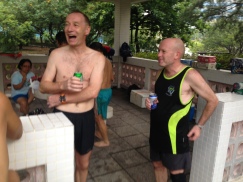 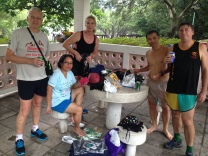 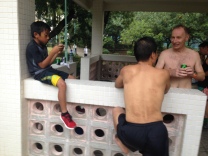 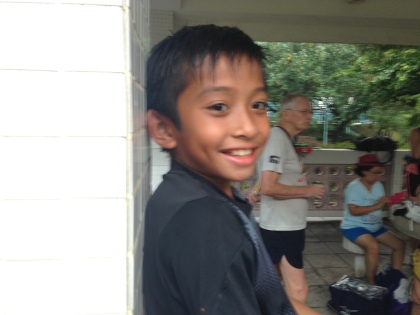 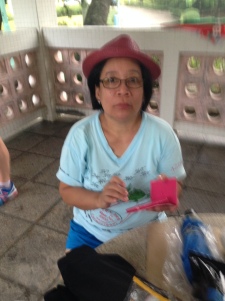