The Spirit Of The Briefing 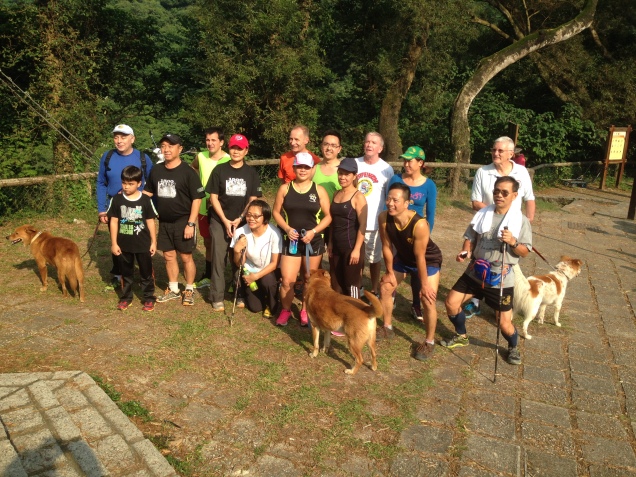 First-time hare Luk Dim Boon put on a good show with his run at Bride’s Pool Road on a Wednesday afternoon. Being Chung Yeung Festival the Wu Kau Tang area was inundated with day trippers – but trail went where hikers seldom sally. After a couple of kilometres on road we did some inning and outing in Wu Kau Tang village and then headed out on the main track to Sam Ah Chung. A right turn through abandoned paddies led to a wooded section along a stream, which turned south and got steeper and steeper, with trail alongside the stream involving some slightly precarious clambers and sidles. Here there were no hikers, and after skirting what looked like it could be a waterfall in wet weather, trail looped up through the trees and out onto a high rock-jumbled stream, almost certainly the same one as we’d come up. A couple of Xs had most hashers scratching their heads, but trail was found to the right up through trees and bamboo to the Plover Cove ridge, where an obvious right took us back along the ridge and down to Wu Kau Tang. But if we thought it was a simple jaunt along Bride’s Pool Nature Trail back to the start, we were in for a surprise. Trail dropped down to Bride’s Pool itself, went across the top of the waterfall and thence onto a track with some very steep downs before ejecting us onto a path that led to the finish. Red Rump showed how proper fell runners do it by getting back in 75 minutes, way ahead of the rest of the pack. Travis turned up for a stroll with his dad and ended up being out for almost three hours – a heroic effort.

Liberace ran the circle, during which he berated the hare for his briefing, which touched on the historical and cultural significance of Chung Yeung. “You destroy the spirit of the briefing!” was his memorable accusation.

Most went on to the daipaidong under the bridge in Fanling, where Luk Dim Boon got drunk and pissed up on booze and did some head lolling on the table and didn’t reveal he’d forgotten his wallet until the bill arrived. Fine hasher!