Rumpus Over A Flower

Through the dragon fruit farm back yard to the abandoned pig farms in Tit Hang, we arrived at the construction site for Golden Balls and Golden Jelly’s future love nest. White zinc roof, unfinished red brick walls and freshly unveiled soil that had been under the pig house for half a century. In a dark room almost the size of a badminton court, Golden Balls was sitting on the only furniture, an old blue Chesterfield armchair, welcoming the hashers’ arrival: Penile Dementia, Liberace, Gaele Says No, Catch Of The Day, Velcro Lips, Luk Dim Boon, Soul Man, Sauvignon Bomber (?), Mango Groove, Eunuch, One Eyed Jack.

I don’t know what Liberace was expecting, but he said, “Oh my god, this isn’t even a house, it’s just a shank.” Latecomer Mango became speechless and his eyeballs was almost popped out from his face when he entered the room. Soon he got a big image picture of what it will look like in two months. Then he had a big smile on his face. It was nice for us to see the before and after.

Hare Golden Balls gave the briefing. “A big cross made of toilet paper is an open check, as is the usual flour circle. A flour circle with spikes means trail is laid in each spike direction, three blobs of flour and you’re on. Start is out the gate and through the shiggy avenue behind the grave.”

Trail went immediately into shiggy. The FRBs (Luk Dim Boon, Eunuch, Liberace, Mango) crawled up the shiggy hill to the north, delayed by two paper-cross checks. Finally we emerged on to the ridge with spectacular views of Shenzhen. At the first check on the ridge, Catch Of The Day took the left followed by Velcro Lips. But Eunuch took the right and lead the group into a steep descent. Suddenly Golden Jelly standing on her rooftop saw the bunch of lights coming  towards her. She stopped the group in its tracks, shouting, “Go back, go back! It’s the old trail from last month. Assholes.”  Luk Dim Boon, Gaele Says No, Mango and Eunuch reluctantly climbed back up to the ridge.  At the second check on the top of the hill, Eunuch took the right and COTD the left trail. COTD called, “First flour”, and after 20m down the hill called “second flour”, crossed her fingers and searched for the third blob, then heard Eunuch shout “ON ON” from the other trail. “Fuxx! Again?”

From there it was a nice easy run along the ridge and down to Ma Tso Lung, where all the FRBs were clogged at an unsolveable check in an orchard. Lberace said, “I went everywhere but noooooo trail.” Eunuch bravely went into a shiggy jungle but couldn’t see any trail there. Meanwhile Penile Dementia arrived with a walking stick and disappeared in bushes too, as did Soul Man. Smart COTD thought it must be a check back, and found shining white flour next to an abandoned house only 30m from the check. Now all the pack was running together except Velcro, One Eyed Jack and Sauvignon Bomber.  The flour took us to a local village area where people were having dinner with their families. Some of the villagers were very friendly and cheered us up with “Diu Diu!”. Eunuch cheerfully sang Chrismas songs for them.

After leaving the village zone, we came to Lo Wu Classification Range (shooting range) entrance. There we had a three-way check. Eunuch went left this time and COTD followed him. One flour, two flours and no more flour. Eunuch turned back followed by Liberace and COTD. Sole Man, being new to N2TH3, didn’t know what was going on and COTD explained to him, “There are only two flours and we didn’t find the third one. That’s why we got to go back to the check and see another direction”. Sole Man asked me, “What does the flower look like?” COTD said, “It’s white, about 10cm in diameter”. Armed with this knowledge, Sole Man finally understood, went off to find the flower and disappeared in the dark.

Meanwhile Gaele Says No, Luk Dim Boon and Sauvignon Bomber got the  check right and were running on home. After a 2km flat road run, we finally return to the Golden nestle where cold beers were waiting for us. Half an hour later Sole Man arrived. – Catch Of The Day 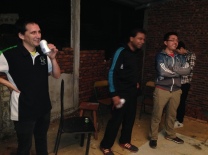 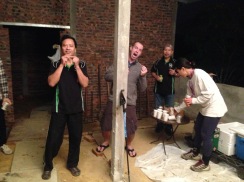 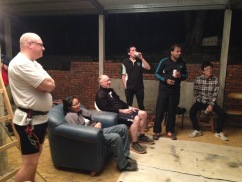 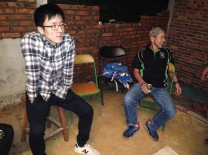 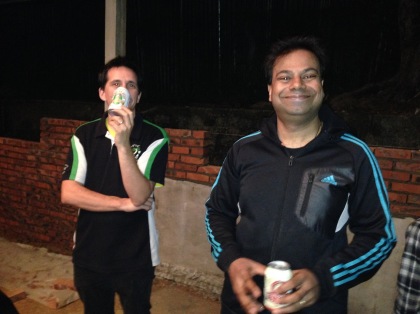 Diamond Hill to The Love Shack

Hares – Inflato (that’s Oranguwank to us – Ed.) and Yummy Mummy

Dubbed “The X Factor Run” this hash was all about Love Shack visit #10 (X), and not some baloney reality TV show. The promise of Yummy Mummy hospitality brought out a few notable returnees, not least Any Dick Will Do and Smallbone, along with Fourus. This was also a joint run with N2TH3 who honoured LSWH3 with the massive presence of … four.

Starting outside Exit A1 of Diamond Hill MTR, the usual rush just before 7pm as the likes of Sweaty and The Parkys arrived just in time for the briefing. “Single run with on-on arrows including one marked as NNT / LSW”. “So two runs?” asked Frank The Plank, obviously not paying attention.

“Only three checks” were advised by Inflato, “but a number of check backs”. Oh, yeah, we’ve seen an Inflato CB on a Wednesday night … in particular the 1.2km CB at Sha Tin Pass a few years ago. We were not be disappointed by this run’s check backs either.

Wai Chee Kok sped up Lung Poon Street and on towards Po Kong Village Park pursued by Hopeless, Lost In Translation and Smallbone. First check takes the pack into Tsz Wan Shan Service Reservoir, alongside the cemetery. Second check solved by Hopeless as WCK and Burning Lust take the wrong options, and then the start of the up up up. Comes Up The Rear now adds to the front runners as we take old paths through the previous squatter village areas, trail not trodden on for some time.

Thereafter a charge home for the last 2km led by Comes Up The Rear, Hopeless and Lost In Translation to the 52nd floor panoramic view of Hong Kong and superb food on the balcony.

Down downs by Hopeless

Hopeless – “stealing all my down downs”

A simple run for the Christmas-depleted pack, although Vibrator returned and Soul Man made his N2THG3 debut. Having come straight from the office Christmas party (Catalunya, incredible food by El Bulli alumni with free-flow champagne and wine) I was late for the start and not in any state to run anyway, although I tried. Setting off with fellow latecomer P. Dementia, with hare Liberace’s words echoing in my ears, I looked for the recommended short cut (up the hill to my old place, cut through the tunnel and pick up the trail home). I quickly parted company with my pard, who insisted on doing the full run. Then followed a fruitless half hour as I tried to find Liberace’s old gaff before cutting my losses and heading back to the finish at the sitting out area south of the Belly, where the pack had already assembled. There may have been some sort of Christmassy drink. There was a circle, during which I gleaned that the pack had climbed a hill with some shiggy, which was hairy (hare-y?) in places.