Liberace’s run from the Wan Tau Kok pagoda was just that: one run. But it ended up being at least five runs as confusion reigned in the foothills of Tai Po. Trail went initially through the streets of the town before going up into the squatter villages, and then, apparently, into the shiggy of the slopes of Ma Wo. But the route to the shiggy foiled most hashers, who ended returning to the start by various ways. Even the three who claimed to have found the shiggy – Gaele Says No, Mango Groove and Eunuch – had differing accounts, with accusation following counter-accusation as they each prosecuted the other with short cutting. Punishments were meted out in the circle in the form of downdowns poured from a magnum of Ruinart champagne, courtesy of Golden Balls, who had won it in a lucky draw. This apparent generosity was sparked by it being the 26th wedding anniversary of Golden Balls and Golden Jelly. You do the math. Free bottle of champagne versus expensive dinner in a 5-star hotel…cheapskate!

Fartypants was down as the hare so it was no surprise that Walky Talky set the run, accompanied by sidekick Hard Up. It was also no surprise that they had carried out no reccie and set off on spec along the Shek Kong Catchwater to see what they could find. What was a surprise was that the ladies found an abandoned overgrown path leading up Tai Mo Shan, a path nobody had done before, a path with so much shiggy that just went up and up and up before heading down and down to the Ancient Trail, from where it was a simple run down to the barbecue pits. It appears that when it got dark the hares, without torches, were still heading up into the unknown shiggy. Proper hashers. A splendid run topped off with a sausage quotient. Honorable mention goes to Catch Of The Day, who got round the trail on crutches. Dishonorable mention goes to Catch Of The Day, who was supposed to do this write-up.

Redemption run? Maybe it was for Luk Dim Boon after his Hong Lok Yuen Run 1777 debacle, but it was retribution for everybody else, with a runner crashing, others veering off course and three stooges out on the misty tops for three hours – and I’m not talking about an hour each!

To be fair, the hare set an interesting and very well marked trail on the slopes of Tiu Tang Lung, the biggish peak north-west of Wu Kau Tang. The GM, as is his wont, set the small pack off on the stroke of 7.30, just as Golden Balls arrived from his monster commute from his office at Mid Levels. By the time he’d changed he was five minutes behind the pack, a happenstance that was to have significant repercussions later on in the run.

Liberace was late and in a murderous mood as he’d asked us to wait for him, while Eunuch was absent sick, a victim of the mines on Saturday and hanging around in his wet clothes after the run when everybody else sensibly changed into their dries.

The run started with a couple of loops in the village before heading up the western flank of the mountain via a seldom-used track. Victim 1 was claimed here, with Gunpowder Plod wimping out to do his own thing. On up through forest and thicket as a thin drizzle started to fall and the tops were lost in cloud. Trail was very well marked – the hare had obviously made good on his promise to mark every 50 metres.

Back on the western ramp backmarker Golden Balls had caught Geriatric, who was moving slowly. Then, as he approached the trig point he heard Serbian Bomber’s plaintive voice: “GB, tread carefully. a branch whipped my glasses off and I can’t see a thing. Can you help me find them?” Victim 4.

A fruitless search of the shiggy ensued on the misty top, aided a few minutes later by the arrival of Geriatric. Within two minutes his torch had died. Victim 5.

GB said, “We can’t waste battery power looking for your specs so we’ve got to start back,” but Serbian was not to be denied. “I’ve got spare batteries for my torch and a spare torch and spare batteries for the spare!” he pronounced, eager to get out his well-thumbed survival kit, the one he nicked from the South African SAS. So they carried on searching until even Serbian tired of it.

Under advice from GB, who knew and dreaded the descent, they went back down the way they came up, single file, GB in front, Serbian in the middle and Geriatric behind in close formation as GB described the trail to Serbian. “Rock on the left, step down, tree stump on the right, steepening, two big steps down…” This agonisingly slow descent continued for half an hour until GB announced a NO NO (reverse ON ON) ahead, indicating they were doing the trail in reverse as planned. But no! It was an ON ON. And in front of them the cloud-shrouded mass of Tiu Tang Lung reared up. “We’re going back up the mountain!” came GB’s desolate wail. Victim 6.

Three hours after they set off the three stooges returned to spirited abuse from the rest of the pack, who had drunk all the beer (almost), and in the ensuing carnage of the circle were characterized by Mango as “one without glasses, one without a torch and one without a brain!” – Golden Balls

With hare One Eyed Jack’s admonition to bring torch, gloves and a change of clothes for The Saturday Run No. 10, this trail had all the makings of a corker. Anticipation was fanned further when he delivered the briefing. “There are side passages in there, they haven’t been recced so don’t go in them. When you hit the water, keep to the centre or the right,” to which Anus The Horrible quipped “Just think Michael Heseltine.” An effective enough ploy as it turned out.

By now it was obvious we were going into the fabled Mines of Ma-On-Shanria. “It’s 5.5km, half of it underground,” was the hares parting shot as the 15-strong pack set off. “But I didn’t come here to run in the dark,” whinged Mango Groove. “I do that on Wednesday nights.”

Vibrator couldn’t stay away, despite having run Braemar Hill in the morning and having entered the full Lantau Mountain Marathon the next day. Ben had returned, having taken more than a year to work up the courage to run with us again after his last appearance, when he set a record of 5 hours on trail – lost in the dark on Pat Sin Leng. And he’d brought along a friend, Leo. Stunt Double turned up for the 3pm start, having just got off a plane from Korea at 1. Even Eunuch was there muttering about jumping sharks – and he proved to be supertoughdad by taking his son down the mines.

A jog up the road for a kilometre or so past a couple of desultory checks ended with an abrupt dive left onto a trail through bushland and forest, emerging eventually at the bloked-off 240m (elevation) mine portal looking like some sort of troll’s letter box. Even more surprising, One Eyed Jack was sitting there with a camera. One by one we hoisted and posted ourselves through the slot into the heart of darkness. I went last, not wanting to get stuck and hold everybody up. No, Liberace went last as co-hare and sweeper.

Torches on. Weird scenes inside the iron mine. A tunnel high enough to walk upright in, a shaft filled with water, then suddenly a long long gravelly ramp down into the bowels of the Earth, aided by a fixed rope. I quickly caught Luk Dim Boon and Ben, who were using a bizarre backward-descending technique. After an age we entered a short flat section, then another ramp down, this one lined with the rusting remains of a narrow-gauge railway track. There was a lot of water and some parts were slippery and waterfally. I was reduced to a crab-like descent between the rail tracks with my torch clenched in my teeth.

Thus we came to the 110m level, which started off fairly dry but by the end of it, about 2 kilometres on, was flooded to the bowl of fruit level. I passed G Spot taking a photo of something, then Stingray, then Eunuch and Travis. On, on in the darkness. Just think of Michael Heseltine. Don’t think Michael Foot, that’s far left. Jog. Wade. Splash. There’s Dingaling taking a picture of me. And there’s the light at the end of the tunnel.

Good that the hare resisted the temptation to put checks in the mines. Don’t want to fall down those shafts…

I emerged with Luk Dim Boon through the two low portals at the 110m level entrance. A short path out to Ma On Shan Tsuen Road, then the slog back up to the barbecue pits from whence we had come. Needless to say, everybody passed me on the ascent and I came in just about the backmarker.

Non-runners Antiseptic, Overdue and Electrolux very kindly cooked up a fine spread of meaty comestibles and One Eyed Jack provided some fine discounted cheese that went very well with BJ’s 33% extra! wine for a feast worthy of the ravenous troglodytes that we were. Eunuch ran the circle most excellently, but for some reason kept on about jumping a shark. And the only down down I can remember was the hobbit one for Stunt Double and Anus The Horrible.

An excellent effort by all, and an outstanding hash that will long be remembered. 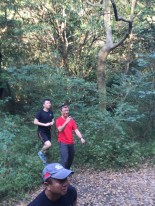 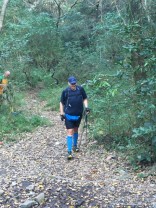 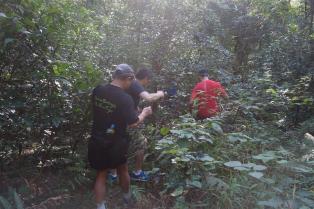 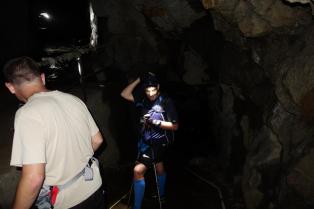 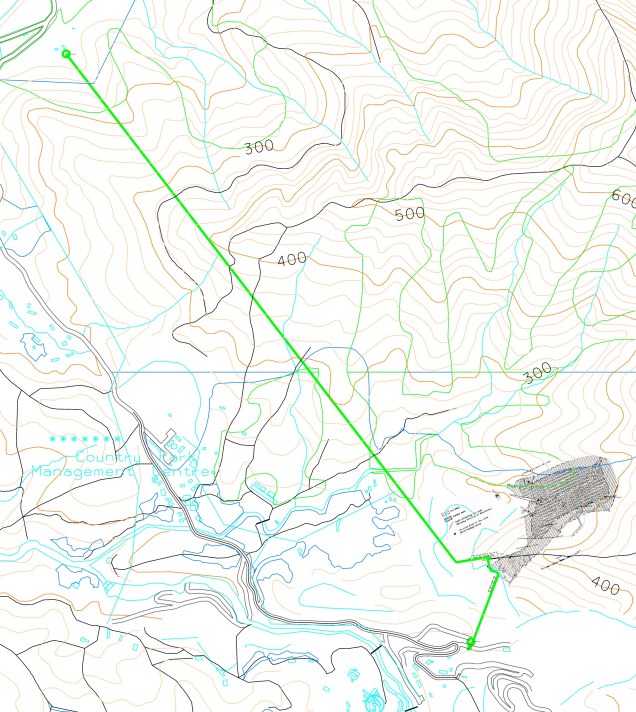 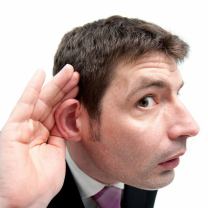 SSSSHHHH! Mango, bless him, had produced an ear-friendly rather than noisy run.

Starting at the quiet village at the end of Ping Pong Kong Road this was to be the Silent Hash. SSSHHHH.

Keep out of the village and find a nice quiet place to park. No need for a noisy briefing, the village security are already getting a bit twitchy, Liberace your van reversing warning sounds like late-night Miami Vice.

“When you see ‘Please be quiet’, be quiet.”… So we’re cutting across the golf course, we thought. “I’ve had a word with the beast handlers already.”… So we’re running through Beas River Stables.

SHHHH. On On … keep together and no shouting. Ping Kong Village and on to OnPo. Checks, paths, streams … Dogs, dogs … keep those dogs quiet, absolutely no barking.

Here’s a little old lady handing out sticks of Brighton Rock ???? SSSSHHHH. No calling, no screaming, we have animals … cattle, donkeys, paddocks … do not disturb. There can be no risk of a stampede.

There’s trail up the mountain. SSSHHH. On on quietly. On up silently.

No calling, the trees trembled in the cool breeze of the frosty winter’s night.

The pack spread far and wide over the ridge … no calls of on … no sound of checkbacks.

Chong Tsin Leng beckons … a world without sound where Silence is Golden … Balls charging down.

The Trail crossed to Ching Ho Estate, accross the rapids of the Wet Willy river. The water flowed silently, the pack ran without a murmer, only a carefully stifled “On…SSSSHHH…on” to be heard.

Back in the earie desolate Ping Pong village the pack starts to shuffle back in. Hash Cash whispers her demands. The Circle is hushed up … Mango is cut to pieces for his outrageous use of Hash time. Catch of Day sweeps the awards for Best and Worst Run of 2016 … and a struggling chicken swims slowly around in a Velcro Lipped curry sauce before being silently devoured by the silent masses of Hong Kong’s soundless Hash. – Stingray