With hare One Eyed Jack’s admonition to bring torch, gloves and a change of clothes for The Saturday Run No. 10, this trail had all the makings of a corker. Anticipation was fanned further when he delivered the briefing. “There are side passages in there, they haven’t been recced so don’t go in them. When you hit the water, keep to the centre or the right,” to which Anus The Horrible quipped “Just think Michael Heseltine.” An effective enough ploy as it turned out.

By now it was obvious we were going into the fabled Mines of Ma-On-Shanria. “It’s 5.5km, half of it underground,” was the hares parting shot as the 15-strong pack set off. “But I didn’t come here to run in the dark,” whinged Mango Groove. “I do that on Wednesday nights.”

Vibrator couldn’t stay away, despite having run Braemar Hill in the morning and having entered the full Lantau Mountain Marathon the next day. Ben had returned, having taken more than a year to work up the courage to run with us again after his last appearance, when he set a record of 5 hours on trail – lost in the dark on Pat Sin Leng. And he’d brought along a friend, Leo. Stunt Double turned up for the 3pm start, having just got off a plane from Korea at 1. Even Eunuch was there muttering about jumping sharks – and he proved to be supertoughdad by taking his son down the mines.

A jog up the road for a kilometre or so past a couple of desultory checks ended with an abrupt dive left onto a trail through bushland and forest, emerging eventually at the bloked-off 240m (elevation) mine portal looking like some sort of troll’s letter box. Even more surprising, One Eyed Jack was sitting there with a camera. One by one we hoisted and posted ourselves through the slot into the heart of darkness. I went last, not wanting to get stuck and hold everybody up. No, Liberace went last as co-hare and sweeper.

Torches on. Weird scenes inside the iron mine. A tunnel high enough to walk upright in, a shaft filled with water, then suddenly a long long gravelly ramp down into the bowels of the Earth, aided by a fixed rope. I quickly caught Luk Dim Boon and Ben, who were using a bizarre backward-descending technique. After an age we entered a short flat section, then another ramp down, this one lined with the rusting remains of a narrow-gauge railway track. There was a lot of water and some parts were slippery and waterfally. I was reduced to a crab-like descent between the rail tracks with my torch clenched in my teeth.

Thus we came to the 110m level, which started off fairly dry but by the end of it, about 2 kilometres on, was flooded to the bowl of fruit level. I passed G Spot taking a photo of something, then Stingray, then Eunuch and Travis. On, on in the darkness. Just think of Michael Heseltine. Don’t think Michael Foot, that’s far left. Jog. Wade. Splash. There’s Dingaling taking a picture of me. And there’s the light at the end of the tunnel.

Good that the hare resisted the temptation to put checks in the mines. Don’t want to fall down those shafts…

I emerged with Luk Dim Boon through the two low portals at the 110m level entrance. A short path out to Ma On Shan Tsuen Road, then the slog back up to the barbecue pits from whence we had come. Needless to say, everybody passed me on the ascent and I came in just about the backmarker.

Non-runners Antiseptic, Overdue and Electrolux very kindly cooked up a fine spread of meaty comestibles and One Eyed Jack provided some fine discounted cheese that went very well with BJ’s 33% extra! wine for a feast worthy of the ravenous troglodytes that we were. Eunuch ran the circle most excellently, but for some reason kept on about jumping a shark. And the only down down I can remember was the hobbit one for Stunt Double and Anus The Horrible.

An excellent effort by all, and an outstanding hash that will long be remembered. 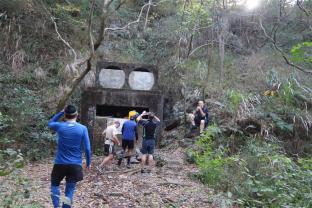 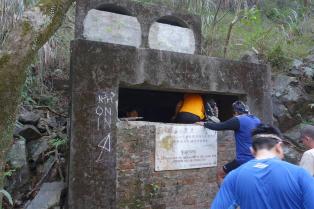 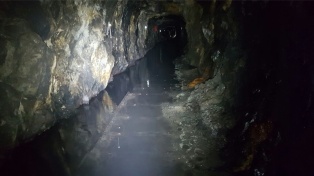 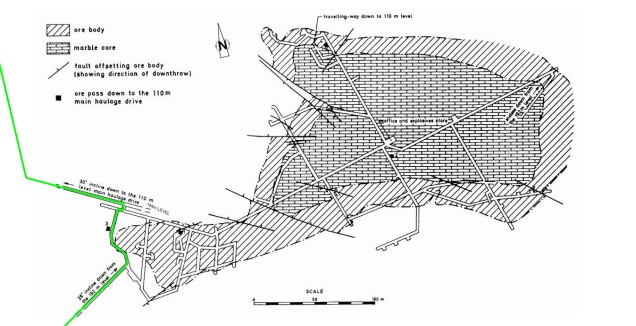