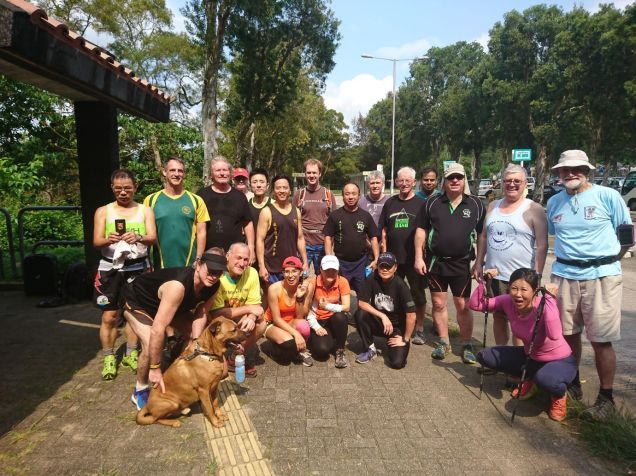 The Hares: Geriatric and Miami Vice – not quite as old as Buddha but close

The Markings and Briefing by Geriatric: clear evidence of dissent on trail between the hares; confused markings and lack of clarity, no toilet paper! Only marginally better than Diane Abbott’s recent car crash radio interview: https://www.youtube.com/watch?v=TOZY33H8KIk

The Run: The pack was off smartly at 3pm (thank you GM 🙂 and shot off down a path to the beach led by Gunpowder Plod and Dougal to the first check. Plod, suspecting a double-double bluff, headed left and the rest of the befuddled pack headed right; and they were right.

As Plod returned in the rear he heard the distant plaintive Gaelic wailings of another geriatric latecomer trying to catch up….

Plod eventually arrived at another check by the beach in time to see the pack milling about leaderless with Liberace leading a misguided charge of hopefuls into the bushes.

Apparently only Golden Balls and the GM braved the infamous muddy water crossing with poor wee Stunt Double (attempting to follow) seen rolling up his shorts before wading in over his head. His delectable wife Hoover left him too it, hands waving in the air, bubbling away, leaving him to be rescued by Penile Dementia and Oranguwank.

Meanwhile, Plod, with his local knowledge (three previous trails), sensibly led Bunter off through the village and around via road to Che Ha village, neatly intercepting the front-runners milling about at another check.

Plod once again took up the challenge [short cut] and ran through the village, encountering 9IC, DinDins and Ophelia exiting their pad (thinking the run was on Sunday).

However, only the faithful (but gadgetless) Bunter followed. On on was found beside the river but, not being bamboozled by the Hares’ feeble effort to lead the pack in the wrong direction, Plod again led Bunter across the bridge to find trail on the path heading towards the golf centre, the feeble-minded pack (FMP) eventually catching up at the base of the hill to the pier opposite Sam Pui Chau.

Here the FMP, bleating excitedly, charged over the hill and down the other side leaving Plod to lead Golden Balls (catching up for the fourth time) into the shiggy onto the real trail up the hill to the trig point.

Here they had plenty of time to stop and admire the fine views of Sam Pui Chau and Three Fathoms Cove before the FMP caught up again.

The trail then led down and through Tseng Tau village to the sea and then back up towards Sai Sha Road past the Garden Farm Golf Centre. The trail then split into rambos and wimps.

Plod chose wimps and found Golden Balls rampaging like a lost bull in Ma Kwu Lam village. After Plod had cooled Dougal with a nice garden hose shower, he led Golden Balls back on trail to safety through the woods and fields towards Che Ha village.

However, GB again got lost while picking daisies so Plod and Dougal finished the excellent trail after crossing Sai Sha Road into Kwun Hang village, circumnavigating the temple and dodging hordes of fork-wielding barbecuers en route to the finish in a perfectly judged 65 minutes.

Moonie however preceded Plod, having stormed round the rambos after claiming to be ill and not wanting to run. Second rambo Liberace was later found to have short cut, while Sticky outsprinted Oranguwank in a sickening display of competitiveness.

The Circle: Led by GM Serbian assisted by stand-in RA Mango, much cheap/free/past sell-by-date ale and cider provided by Sticky Aphid Bottom Exudate (aka Honey) and the remnants of the 1800 booze was consumed.

Mannequin maker Kevin was named My Neck In after a brief undemocratic vote in which most present shouted for a rubbish name.

Ophelia (DinDins exudate), the youngest member of the most exclusive hash in the Northern New Territories, was named Roadie-O after her father 9IC loaded her tricycle pannier with a large assortment of alcoholic beverages for his short walk home (photo). – Gunpowder Plod