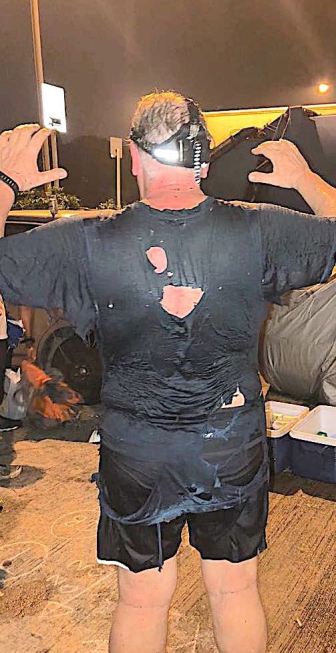 Since that Saturday run of the 2nd of June and its scorching heat, the RA has done a great job in keeping the runs under water and subsequently refilling his own well. How many households in Hong Kong are relying on natural well water for their domestic and gardening needs?

First was Stingray (Run 1867), who had to redo his markings in a last minute effort up above Ma On Shan on the day the sky started to break down after a long dry spell. The few braves who went for it had only good things to say about the run. Some say there was a short cut that kept them 2 more kilometres in deep doo doo, up shit creek if you prefer. Some other said it was only one km. Guess whom.

The next week was Liberace. On that day, average rainfall on HK territory was 109mm – a month record. He too had to redo his markings. Starting from a tyre-killer car park (Eunuch got a bolt through his tyre) at the shit end of Yuen Long Industrial Estate, with a spark in the eye Liberace briefed us: fairly flat , no shiggy, R-W split , chalk, flour and toilet paper after running out of flour.

Off we went and quickly reached a flight of stairs up the mini hill backing I Shing temple, barely overlooking the surrounding concrete mastodons. Easy stuff. At the top, no more concrete trail, we had to dive into a bamboo groove, dripping 100mm of water all over our back. Quickly the crouching position is the only way to go. Some also level the ground with their bottom to move forward under intricate bamboo, bushes, creepers and other snakes.

The marking is excellent, all made of flour, and leading us left right right left right left down all the way to a fence that prevented us slipping down a filthy nullah. Got to go along the fence, no visible path , just patches of flour among creepers that hold your stomach, your neck, your ankles. Among elephant grass that cut your hand , forearms and cheeks. (And poison sumac that blisters you a couple of days later – ed.) We haven’t got to the R-W split but this is far more than Rambo . It is not about killing others, it is about fighting for your own survival. This is Predator trail! Just take a look at GB’s T-shirt! It was brand new at the start!!!

The gate out of all this mad hell is a 20m long canyon of 18ft high bamboos, ready to go scaffolding. It is all intimidating before returning to the concrete light and grey atmosphere of industrial estate. As Mango put it: The rambo / wimp split was at the junction after about half a kilometre from the dense shiggy. The rambo trail took us left further along the main road and then along a nullah. On the other side of the nullah was an interesting looking hillside but alas trail went right, behind the KMB parking spaces and straight on to another check. It wasn’t long before we arrived at yet another lorry park with a dead end. Dead end yes but for Libs this was fun as he marked paper trail through some shiggy, just for a laugh. Once out of the final shiggy we ran along, sighting an on home along the waterfront. Another kilometre or so and we were back at the car park.

The 20th of June (Run 1868) is dry all over Hong Kong, bar one spot: Tai Po Kau Forest. Which is where hare Dram chose for his run. The trail is a bucolic wander through the jungle, with the constant noise of water gushing through rocks. Difficult to keep the balance in those conditions and crashes are inevitable. QT performs best of all. Read his report here.

June 27 (Run 1869) is a Golden Affair: Gelly the Hare Raiser got herself to set the run but, lacking time, Balls would craft it for her. It was suppose to be at Tai Lam Chung. But on the morning of the run, Balls had to go into hospital.

There is a hare position to grab and Liberace takes it with only few hours left. The fate is achieved with the help of Gunpowder Plod, starting from King’s Belly. But on another dry and baking day, Tai Po got drenched again.

I’m late and skip the first loop above KB to reach quickly the bottom of Shan Tong Road. The trail shortcuts through the wood to land near the entrance to Paragon. Back to Shan Tong Road the trail passes the playground on the roadside and takes a sharp left to start the climb through the wood. A welcomed short cut to avoid the lengthy Shan Tong up swoops.

But What a climb! Liberace claims during the circle that it was a proper trail. Dude! in the dark, with mud crawling down, dead trees and creepers blocking the way, it wasn’t bucolic. Even the hoover boys (Gaëlle Says No and Eunuch) struggled with it.
No matter the twist the trail is taking, the full moon is just right up there, bright and beautiful, shattering the last remains of clouds, seemingly under our grasp. But she’s still 384,000km away from us. And the elevation above Shan Tong Road barely reaches 240m… Oh well , next time…. this puny quarter km was good enough. Time to go home. The well is full now, get well GB, King of Rain. Thanks Liberace for those two memorable runs in a fortnight, King of Shiggy.  – Creme Brulee