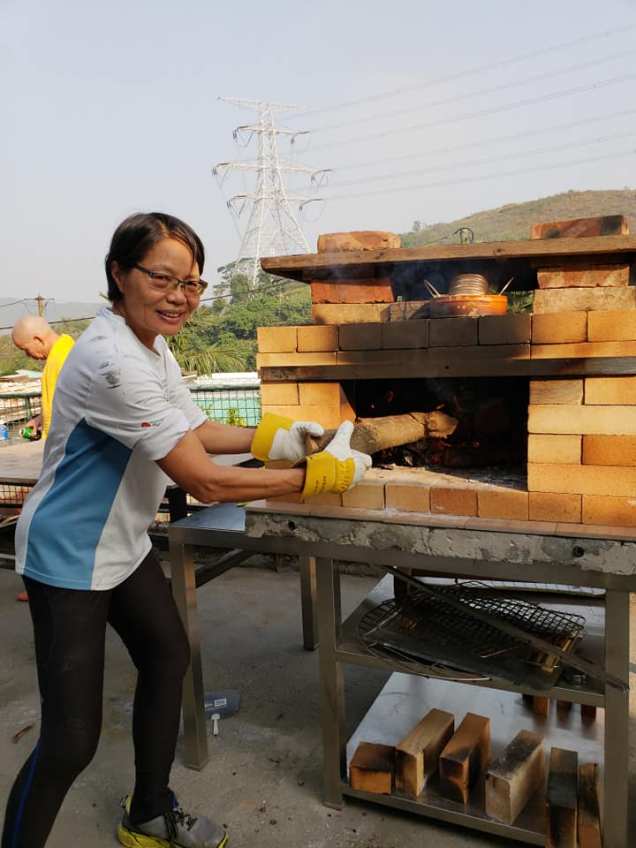 Golden Jelly scored a triumph with her Boxing Day Pizza Hangover Run, capping an “easy” trail around the hills of Tit Hang with a feast of wood-fired pizzas from a brick oven.

On a temperate sunny afternoon hashers set off along the dirt access road and straight into shiggy, soon working down a trackless hillside to a steep shotcrete slope and its overgrown access steps. From there, trail seemed to go into the dragon fruit farm but turned right to Ma Cho Lung, eventually crossing to the northerly range of hills through a gate. Of course locals were on hand to warn us off, but nobody paid attention, particularly Salesman.

A steep slog up to the ridge followed, with its spectacular views of Shenzhen, then a steep descent through bracken which saw Hoover navigating it on her arse, before a surprise arrival at the finish, where the hare had laid out a formidable array of drinks and snacks.

The usual boisterous circle followed, enlivened by the presence of various dogs and kids, before the promised pizzas started arriving from galley slave Golden Balls, who only emerged from the kitchen in order to chuck another pizza in the oven. The spirit of Zimmerframe was invoked as the slow-arriving pies were dispensed in bite-size morsels by See No Weevil, wielding a fearsome Kyrgyz blade — the scourge of the weevils.

As wine mulled and kids plundered the house for weaponry including guitar, drum and plastic trombone an impromptu singalong developed with Fartypants at the fore.

A veritable smorgasbord of a hash.

What a bunch of nutters, with their strange metric ways and fluorescent-jacket-wearing street winos – it’s no wonder that their president is a small boy who had his genitals raped off by a Jesuit school teacher.

The Markings: Overcomplicated of course. The usual CB, T, on on and trail, but….

W2 / R2 /R2P2 – bit where the 2nd rambo trail crosses the 2nd wimp trail – at this point, the 2nd rambo trail is then called ‘2nd rambo’s part 2’ (R2P2 – which I think was the name of a gay secondary droid character  from Star wars). Why he didn’t simply use R3 instead remains a mystery.

Smiley face – we didn’t quite get to the bottom of that marking – something about croissants no doubt.

The Run Explanation (please don a French accent when reading this):

Now I’m not a great fan of documenting the intricacies of runs, as a typical narrative descends into “and then….and then”, but this run was something else.

The first rambo / wimp split was quite literally at the start of the run. wimps going up the path towards the mountains and the rambos leading up some steep retaining wall service steps towards a tramp’s house, where we found the words “Rambo’s Go Wimps” inscribed on a drain outside.

Therefore after this brief futile jaunt up a slope, the rambo runners had to go back past the silhouette figure of crème Brule – his smile nestling comfortably within his beard revealed that this was a hare who plainly enjoys dishing out torture.

The next rambo / wimp split was not too far up the mountain – wimps taking the main path and the rambos up an overgrown rocky path which actually turned out to be a good bit of trail – this all melted into shit after the R2P2 split, as the trail became more vertical, ending up at a buzzing pylon where Liberace and myself got hopelessly lost like twats for a full 10 minutes.

Saving the day as usual was Penile Dementia who immediately found the correct trail back down the hill making the two of us look like bloody idiots. Charging our way down, the three of us came to a check – all three of us checking in different directions. Both Libs and PD returned after 20 seconds claiming no trail and despite protests from myself, they decided to take the trail that I was checking. Ten minutes later the three of us were still checking for trail and after some sharp thinking, we decided to descend the mountain by following a mountain stream, eventually discovering trail crossing it.

“I am sure the trail is going this way” Said Libs pointing his torch at the other side of the river.

We ran that way for 10 minutes until we saw an arrow pointing against us. We’d come so far off trail that we’d long cutted a huge circle back to the W2 / R2P2 split. Proven as bleeding idiots, we limped back home along the wimps, passing a crippled Catch Of The Day, a French madman in a car attempting to save said cripple, wife of French madman, a grinning Bunter, and a bucket full of shortcutters.

Circle was full of cheese sausage, and mold wine – we all got drunk and rowdy – the most wonderful time of the year. 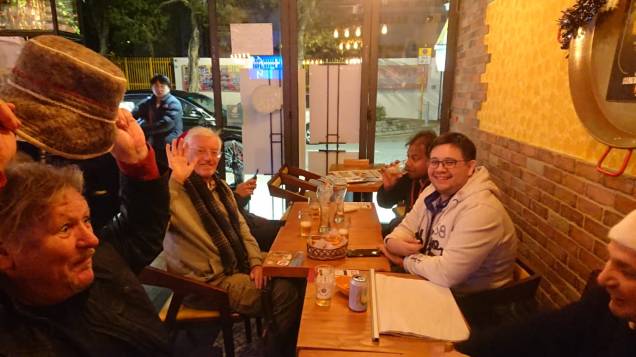 Tai Po, with its 45 pubs, is the drinking capital of the New Territories and the perfect venue for the Christmas pub run, an event eagerly anticipated every December and trained for all year in madcap circles and subsidiary sessions. Would the pack be able to challenge the incredible record of 25 pubs set in 2011 by the hard core of Serbian Bomber, Stingray, One Eyed Jack, BOF and Golden Balls? Would the hostelries of Tai Po be thronged once again with carol-singing merriment and bonhomie? In short, no. The excuses were starting to wear a bit thin.

One Eyed Jack: Got an upper respiratory tract infection.

Bunter: Stuck in TST for a dinner.

Back To The Future: Won’t be able to make it tonight.

At least there were a few names from the past on the starting line at the King’s Belly. But no. “Too old to run'” said Chilly Willy. “Injured,” moaned Gloria. “We won’t be joining you,” sniffed Victim and North & South. Then a missive from No Rough Stuff: “I can’t join tonight, I need to do OT at the office.”

“Who’s OT?” demanded Mango. “Lucky guy. Any relation to QT?” To which NRS shot back “If OT was a guy he’d be the unlucky one.”

And then, in a post dripping with bitterness and sarcasm from Mango: “Apologies, I will be present and I shall bring the chalk.”

Thus it was that on a cold cold night the Magnificent 6 gathered at the King’s Belly for the 2018 Pub Run, the run we train for all year. It’s such a tough event that the attrition rate had indeed been alarming, but Golden Balls gamely set off with the chalk to live-hare the first leg to pub 1, followed two minutes later by the pack of Geriatric, Liberace, Mango, Stingray and Eunuch, moving with fluency and co-ordination through the icy canyons. The first leg included a hill section half way to Wan Tau Kok Lane before dodging back down to the mazy alleys of town and a check at the pedestrianised zone. This flummoxed the pack, who weren’t used to such cryptic signs on a pub run but eventually they found their way to the taxi rank on Po Heung Street and — another check! “Outrageous!” the pack chorused, but trail was soon found leading to a lift in a building where GB was waiting on the second floor in a newish place called Free House, unknown to most of the runners. A WhatsApp came in from QT, who had arrived late and was following trail from the Belly: “Which complete and utter half wit set trail to the first bar?”

Second leg was set by Stingray, a straightforward trot through howling winds over Kwong Fuk Road to Bar Pacific, where QT was waiting having picked up trail on Kwong Fuk Road. The party was now the Magnificent 7 and things were shaping up for a quick traverse to the Tai Po Centre cluster of pubs with a pleasingly symmetrical return to the Tai Po Market group as the night progressed. But Liberace wrested control of the chalk from Stingray and set off on an idiotic meander back the way we’d just come, towards the Bobby London cluster. Outrage was expressed by QT as we passed one pub after another without being directed in, until we reached triad joint 6V Bar. Mango took over and avoided the sharp edge of QT’s tongue by going round the corner to identical triad joint Bar King, where Eunuch failed abysmally to do magic tricks with a deck of cards, then Geriatric set a mazy trail to the 133. Things were picking up pace as Eunuch took the reins, popping a few doors down the road to the Bobby London where we reminisced about such Bobby legends as Nick Griffin, Jim Nicholson and Steve James. It was time for QT’s leg, and he didn’t disappoint, hardly passing a pub on his way to pub no. 7 — whose name I forget — in Tung Fat Square just behind the Bobby. We were on a roll, holding form and looking good.

Stingray reclaimed the chalk and took us 150m up Kwong Fuk Road to another new pub, Double In, before GB crossed Kwong Fuk Road again to set trail to the Japanese half of the Gili Galu. Trail was edging once more towards the Tai Po Centre cluster as Mango grabbed the chalk and set off on a trail that only a man with no sense of direction could set, chalking arrows initially towards Tai Po Centre and then away, along the desolate tracts of Po Nga Street towards Tai Wo and its exactly zero pubs. After several faffs and short circuits, trail finally homed in on…a Seven-11. A quick tinnie later local resident QT rescued the run, getting us back on track to Tai Po Centre, all nudgers up, swift striding and clear-eyed. But not yet even half way to the record. QT’s leg ended at a pizza pub, the name eludes me –— Tapas, perhaps? — where a surfeit of greasy chips and other equally healthy snacks were devoured by ravenous runners. We then all declared ourselves too stuffed to do any more, and there, at station 11, the pub run ended. 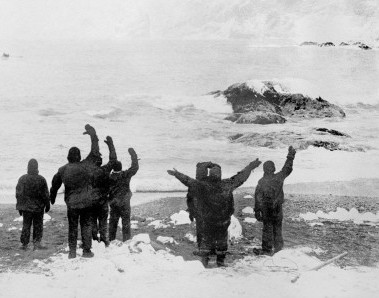 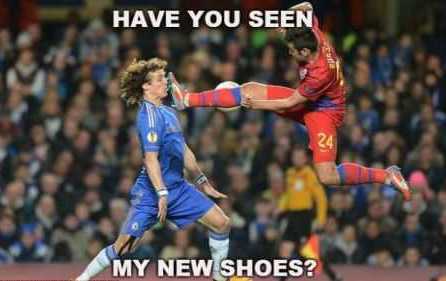 Pre-match news is that injuries have prevented rampaging left half Gunpowder Plod (shoulder, too much barging) and dribble wizard Serbian Bomber (groin strain) from even making the team bus.

Arsenal striker Golden Balls puts the Gooners into an early lead but is stunned by veteran Gerry’s Hattrick.

Everton full back Eunuch rages and fails to settle, fearing a red card following recent bookings in the same stadium.

Stringray, following his recent transfer from West Ham to Woofoo TaiPo, is still a bit off the pace but puts in a solid performance in midfield.

Liverpool winger Mango with his Billy the Fish skills runs rings around his opponents but is justly booked for some over-eager unsporting marking.

Any chance of a Hong Kong victory is lost when P Dementia and Radio One are substituted, to be replaced by F Pants on loan from Shek Kong United.

Gold Coast goalkeeper One Jack Eye saves a lot of times, and cuts shots as usual.

China FC legend Liberace plans a talk on tactics at the FCC. He is banned by the HKFA; plans to take up bookselling in Causeway Bay.

In extra time J League superstar C O Day, despite still recovering from serious injury, comes off the bench to create a number of chances, all of which are unfortunately turned down down.

……. more about that next week. — sports correspondent RJK