Same as it Ever Was

Having been sternly warned of the early start (2pm) and the perils of navigating and village parking in the light of the traditional burning of the Wishing Tree ceremony, Moah offered to drop me off at Hong Lok Yuen, so as not to get stuck in a jam, but walk to Luk Sup Gow’s new place. As we approached the HLY Roundabout, I said, “Go ahead, it’s clear, never mind the rozzers!” “Too late,” said she, turning left beforehand, and I had to hike about 20 minutes uphill in otherwise beautifully hot sunshine. I passed by the police and tree-mongs, and picked up trail opposite Leafy Glade, snaking through the village when all at once I saw a crowd, a host of golden Filipinas, beside the meadow beneath the trees, chattering and drinking in the breeze.

It was LSG’s new authentic village crib, and I entered the patio, noting the great pastoral view. “Hello!” said I. “You’re late,” said they, “the runners left 15 minutes ago.” I slung my bag, and presented a Chinese calendar to our host, Beer Tits, as she appeared at the house doorway, who was looking a bit porky. “You’re looking a bit fat,” said I. “I’m pregnant, 18 weeks,” said she. The what was suddenly inside my head talked out, committing a second faux pas – “It’s not mine! ….(pregnant pause)….Er, here’s a calendar from Moah.” Then the music and talking was in my head:

So, Luk Sup Gow, how did you get here?

Looking south to the Lam Tsuen ridge running to Lin Au, I could hear no calls, so set off in hard pursuit. Down the winding path, to the start of a wooded, shiggy trail, with a steep drop left to a stream. Then I heard calls and looked up to the ridgeline yonder. Front running bastards Gaelle Says No, and maybe Dingaling, were eastward bound on the contour path. I figured that’s 15 minutes ahead, so tried to pick up the pace. Then, immediately, what with all the CNY partying, and forced route march to the start, my pulse went off the scale and forced me to go at Spanish donkey pace.

Trail was technical and well marked, with mud and blood.  I wandered lonely as a cloud, that floats on high o’er vales and hills, beside the stream, beneath the trees. Into the blue again, in to the silent water, under the rocks and stones, there is water underground, and as I neared the ridge summit path, my racing pulse decided to have a time out, and I was better able to appreciate momentary scenes of beautiful and rugged nature  flash upon that inward eye, which is the bliss of solitude; and then my heart with pleasure fills. In other words, it was a good trail, pretty in parts.

Along the ridge. Then some down stuff, grabbing twigs and branches. Then onto the rambos, through the ancient valley and meadow on the south side of the ridge, then up the hill at the end, over, down, through the villages and back to the buckets. Knackered.

The party was already in swing even before an extended circle. A big turnount from eminent, hard drinking hashers on good form such as Stingray, Crème Brûlée, Gaelle SN and Canuck mate Mr Titties, Golden Balls, Fartypants, Victim, Stunt Double, Dram, Geriatric, others I can’t recall because they weren’t being bad enough, and of course all the hash ladies, including the one who sawed her foot off and reattached it just for the challenge, Catch of the Day, who was very well-behaved that glorious afternoon and sunset, despite wearing a special Chinese festival hat. Much later some young buck turned up, forgot his name [Green Head Penis], but a newbie FRB who had managed, despite uncharacteristically good markings, to lose trail and run back from Taipo. Latecomers Moah and Hard Up then arrived, and I did not neglect to insult either of them with ’70s “humour” and, as usual, suffer the consequences.

Our hosts were extremely generous as usual. A great barbecue, and loads of craft beer and wine. We wish Beer Tits, LSG, Philip and the the one under construction the very best for an auspicious Year of the Pig.

The hashers beside them danced;

but they out-did the sparkling twats in glee:
A poet could not but be gay,
in such a jocund company:
I gazed—and gazed—but little thought
what wealth the show to me had brought:

For oft, when on my couch I lie
In vacant or in pensive mood,
I have a jolly good wank,

On on – Salesman (with apologies to Wordsworth and David Byrne) 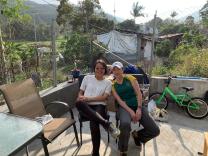 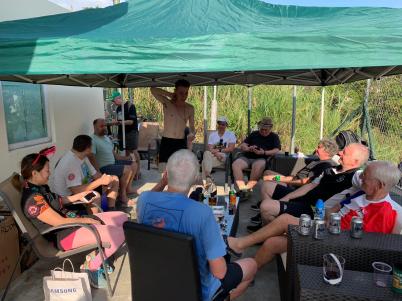 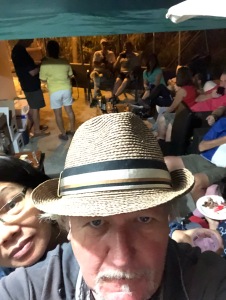 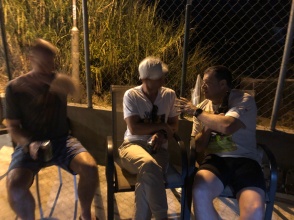 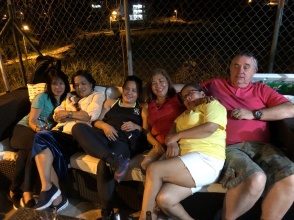 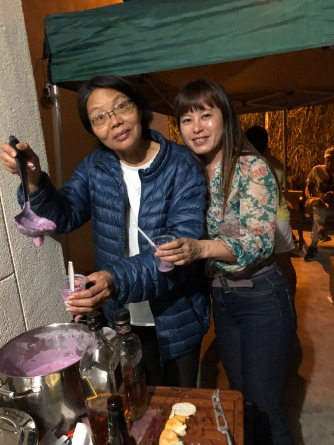