What Run? What A Run!

It looked like for the first time ever there would be no run. A couple of hashers hadn’t pulled their run-setting weight and we were left with an unclaimed date. Repeated appeals, no volunteers. And so the hash was advised there would be no run. Then at the last minute an unlikely heroine stepped up, one with scant run-setting experience and one so afraid of graveyards (which tend to figure a lot in our runs) that she’d rather turn back than go through…stand up Back To The Future!

The lady spent the whole day recceing and setting the run in Tai Lam Country Park, and then turned up with 100 delicious chicken wings for the apres-run. Perhaps in anticipation of a blah run several hashers stayed away, but those who fronted up were rewarded with an almost perfect run with clever checks, good and long-time-untried shiggy (virgin to me but not of course to One Eyed Jack), a stream crossing and a surprise finish.

From the off it was provocative. Instead of going along the road into the country park, trail went through a gate and up steps above a shotcrete slope where runners negotiated some shiggy before dropping down close to the reservoir. Then it was up the road to a check at the steps down to the stream crossing that marks the end of the mountain marathon. Some hashers disappeared down the steps, others carried on up the road to the turning for the trail into the hills. Both parties met with a T. At this point Velcro Lips decided enough was enough and did her own thang.

I forget who it was that found trail after minutes of baffled charging around, possibly One Eyed Jack, but the route went up a steel ladder with a safety ring around it, climbing up a shotcrete slope to a shelf, then via a series of channels and shelves into a steepish trail through high shiggy. I was last onto the ladder and could hear “Trail!” increasingly faintly from above. Soon I passed Geriatric, and then at the top of the hill at about 200m altitude I caught up with Golden Jelly and No Rough Stuff, who were taking photos of each other and of the bridges below across the water like happy clapping tourists. A T next to a check revealed that the hare still wasn’t fully appraised of the nuances of hash markings, but it didn’t faze anybody. There followed a descent I’d never done before, quite rough and overgrown and with typhoon-damage complications, and the odd unexpected cliff if you strayed off trail. This challenging descent into a ravine ended at a broad stream crossing where I lost trail several times trying to head uphill away from the stream. By the time I found trail (along the stream then up some concrete works to re-cross the stream to the original bank) NRS, GJ and Geriatric had caught me up.

There followed a very steep ascent on fixed rope out of the ravine and suddenly you were on a road. I was so disorientated that I thought at first I must be somewhere near Tsing Fai Tong, but then I realised we were on the road we’d started out on, and the finish was less than a kilometre of easy running away. It not being a race or competitive in any way, I powered away from the other three hanging on the rope and scored a stunning victory at the back of the pack!

At the finish chicken wings were being devoured and Liberace was building a huge bonfire. One Eyed Jack led the circle and we stayed until the beer ran out – a sure sign of a good hash. Excellent effort, Back To The Future!  – Golden Balls

Hare Back To The Future 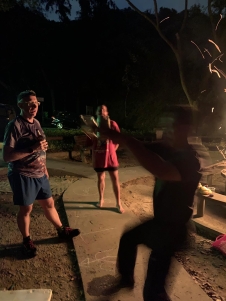