Nothing gets the heart pumping like a good long, cold weather run, hence Catch Of The Day was selected, from a host of candidates, to set this week’s run from her place in Ping Che. Great! Lovely, we all thought. Been there before, should be no problem in finding the location, no need for a map or any of that nonsense. Well Eunuch and Mango were the first to completely botch it up, getting out of their taxi too early, walking the wrong way down the road until bumping into Gaele Says No who had never ever been to this location but managed to find it via Google Maps.

First to arrive at the “Free Zone” start was Stingray, who came a little early to spend some quality time with his angelfish that he had given to COTD upon moving house. However Stingray must move on and come to terms with the fact that he and Angel are no longer an item and he shouldn’t keep having “snog-ups” with her cos technically she is not his fish any more (and I knows a thing or two about fish!) Next to arrive were Mango, Eunuch, Gaele Says No, the GM, with One Eyed Jack bringing up the rear. Well this was looking good, it was only 7.30pm and we were ready for the off, but wait … Mango realised that Liberace had not yet arrived, but when he’d phoned him at 7pm he was near Hong Lok Yuen. Oh, he’s probably caught in traffic, we’ll give him a few more minutes … so we did. A few minutes went by as the pack muttered “He can’t be lost, he has run from here before and besides he spent a whole day driving back and forth from this place whilst helping COTD move in.” Eventually COTD decided to call him on his mobile and got the response “I have just passed the fourth roundabout.” A very confused COTD then handed the phone to the GM, who after even more confusion announces that she would go and look for him.

It was now 8pm, cold, and COTD was not looking very happy but managed to find the willpower to write some secret instructions on a piece of paper that she decreed should only be read if we get lost at a particular check after the first rambo / wimp split. As COTD folded up the piece of paper she looked around for an honest, trustworthy, reliable person to handle this information, so Mango was selected! Mango happily accepted this honour but had no pockets so he gave the paper to Gaele Says No with the comment, “Joe is the only one out of you lot who I can rely on!” After being informed that Golden Balls and Golden Jelly would be arriving very late a decision was made to start walking to the first of three rambo / wimp splits or until Liberace and the GM caught us up.

For the most part the pack dutifully followed the RA’s instructions, with the first check taking us left through some dogs and then onto the soft country trails behind the villages. After about 15 minutes Liberace caught up with the pack, screaming, “Why are you all walking?” … “Because we were waiting for you…” “You f***king guy!” came the reply. “Where on earth have you been Libs?” the pack shouted. “I don’t know … I suffer from night blindness!” came the reply. Upon hearing Liberace’s lovely voice both Eunuch and Gaele Says No took off up the hill through the dense shiggy to a check at the top. Yes!!! this was the check that COTD had written the solution to, which was in the possession of Gaele Says No, who had now disappeared with Eunuch. Stingray and One Eyed Jack did their best going in different directions as end of trails were encountered. Liberace went along a fence with no markings. A long while later the pack managed to clamber down and along a border fence, into a gully, before picking up trail heading into a banana tree plantation. A few checks took us back and over the ridge line with some lovely shiggy leading us out onto the road. Now I don’t want to pick on our beloved Liberace, but every time he got to the front of the pack he promptly took us off trail, his excuse again being he suffers from night blindness. One Eyed Jack was having none of this and instructed Mango to lead before descending onto the second rambo / wimp split with a final loop back around and on home. All were back in just over an hour for an excellent run, well marked and a lot of virgin trail … well done COTD.

Back at COTD’s house warm saki was waiting along with Golden Balls, Golden Jelly (in uniform), barbecued beef and vegetable kebabs and a Thai curry with rice. The chatter this week mainly consisted of the size of the male organ. Golden Balls, being very knowledgeable on this topic, informed us that South Korean men are the smallest whilst the big boys come from the Democratic Republic of Congo. COTD was having none of this, claiming that there isn’t much difference between these two nations before beaming a big smile and saying nothing else. One final key event followed before the circle – yes, you guessed, involving Liberace. He wanted to use the toilet but not noticing that the door was made of clear glass he walked bang-smack straight into thick glass, splitting the bridge of his nose in the process. After the pack had stopped laughing and the blood gush slowed, Eunuch inquired “How did you manage that?” to which Liberace replied “I have told you already I have night blindness!” A circle followed with numerous down downs and all that can be said it was another great Wednesday night on the N2TH3. 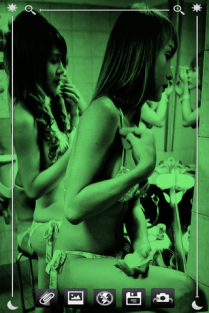