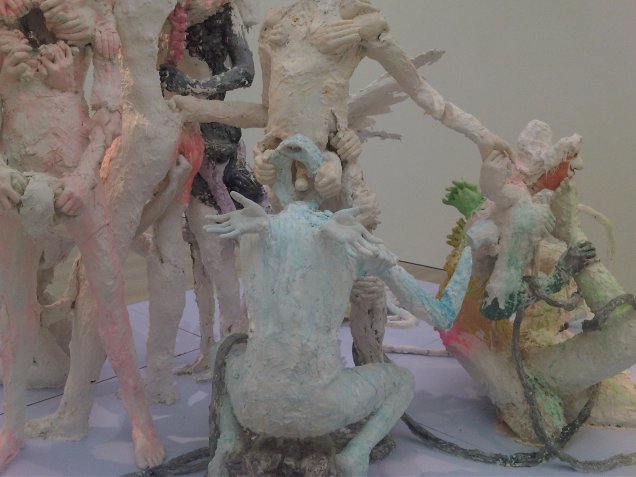 Thank god! The freezing cold weather had passed and we were back to normal winter. The run started from Leafy Glade, set by Gaele Says No.

At 19:30, Eunuch, Stingray, Velcro Lips and the hare were nervously looking at each other, saying “Is that all? Who else is coming? All gone for holiday?” But here comes one after the other, Catch Of The Day, Liberace, Luk Dim Boon, Mango Groove and Goldenballs.

Meanwhile Liberace was wearing his usual black short pants showing his sexy scratched legs, Goldenballs was kitted out in his underwear, low-waist long johns showing the jut and rake of the bowl of fruit. COTD said “Goldenball, your tummy really getting smaller!” Velco said “What? It’s still BIG!”, Goldenball just looked proud as he did a Rick Mayall impression.

A total of eight warriors took off from Leafy Glade heading to Lam Tsuen San Tsuen. The hare said it was a well-planned hash course this time. At the beginning was a warm-up section, with the hare setting the run through the villages on mainly flat pavement with lots of checks. Eunuch, Liberace and LDB were FRBs and didn’t give a shit about marking checks. The next stage was uphill and then heading west using animal trails; after a narrow contour trail with overgrown bushes we came to somewhere with a prominent trail, probably part of the Wilson or MacLehose. At this stage, I didn’t see anyone in front or behind and enjoyed the darkness by myself. I guess the run was about 6-7km? and finally we came back to Lam Kam Road for a cool-down section. It was really a mix of everything and a good distance and course design.

When I got back to Leafy Glade, Velcro, Stingray and Goldenball were already enjoying their beers. Short cut busters! The latecomer One Eyed Jack wasn’t sure he had done the whole course but I respect his effort. Mango finished slower than usual, probably last week’s injury gave him a pain? And lastly Soul Man showed up as a non-runner, he said because he wanted to drink beer with us. Who gave him his name? And then we had one more non-runner showed up, it was D-ram, with his left hand covered with pink baby knitted underwear after his “operation” to correct finger curvature.

The circle was on and on and we opened lots packs of chips and bottles of Tsing Tao, which certainly made Hash Cash Velco unhappy – but not the shop owners. Perhaps next time it would be better to charge a bit more money if we have a circle at Leafy Glade?

Mostly I don’t remember what down downs we gave at the circle, but do remember the one about Japseye? I’m really not quite sure why it is called Japanese eye? I never get close enough to see it or may be my eye is too small. – Catch Of The Day