By Cock Of The South

When the pack gathered at the Kau To Shan park there was much expectation of the sort of shiggy run often furnished by G-Spot from this location. This expectation was tempered by the knowledge that the hare was the Northern’s own urban specialist, Stingray, but nevertheless as Golden Balls led us down the steps to Tai Po Road there was still good reason to think it was a decoy, a ploy to make us lose height before sending us back up the mountain via some seldom-trod, brambled-up backwater. But no, trail crossed Tai Po Road and then went via some steps and obscure byways to the railway (crossed) and Tolo Highway (crossed) before sneaking into the racecourse via some sort of hole in the fence. Trail cleverly avoided security guard placements before going into the multi-storey car park. It was here that Golden Balls, lagging far behind even Mango who was shuffling along with flu of the battycrease, decided to make his own way back and ascended to the top floor of the car park trying to find his way onto one of the pedestrian flyovers that cross over from the railway line, bringing punters in their tens of thousands every Saturday to this temple of horsey speculation. Alas the place was configured to prevent such roguish acts, and after a couple of brushes with security he found himself descending the steps to the racetrack, where thousands of people huddled in the stands watching live telecasts of the racing from Happy Valley. GB found himself running right along the side of the track as a phalanx of ripplingly muscled beasts bore down on him snorting gouts of steam. “Horse!” he called weakly.

Eventually managing to cross Tolo Highway he found himself in some sort of Kafkaesque labyrinth of passageways, staircases and corridors all seeminly engineered to steer him in the opposite direction to the one he was trying to go in. How he wished he’d stayed on trail!

Meanwhile the pack was confronting its own harrowing Golgotha as trail led further into the gritty urban centre of Sha Tin. “Where’s the shiggy?” was the plaintive cry as yet more arcades of brightly lit concrete exerted their macabre effect on the anguished hashers, by now shambling along, their eyes red-rimmed with trauma, their postures an anguished parody of purgatory. At last their wretchedness came to an end as they entered a village and then started up a long flight of steps past village houses and trees, where even the pack of snarling hounds that tried to prevent their passage seemed like a blessing. Eunuch bounded Bambi-like to the top of the stops, passing GB, who had finally worked his way to the same village below, and lo! there was the on-home.

Back at the park somebody did a circle, we shouted raucously, locals came to stare and smile strangely, and the rozzers made their obligatory appearance – for this is the wealthiest enclave of the New Territories and is protected by the state from rampaging zombies and hashers.

Bonus question: Which hasher rode 54 winners in his prime as a jockey? 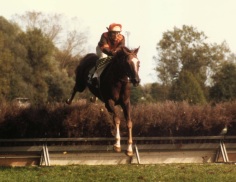 Start: Sitting-out area at the end of Ma Ling Path

Car: Up Kau To Shan Road from Tai Po Road; turn right at the roundabout. Park at the meters at the end of the road.